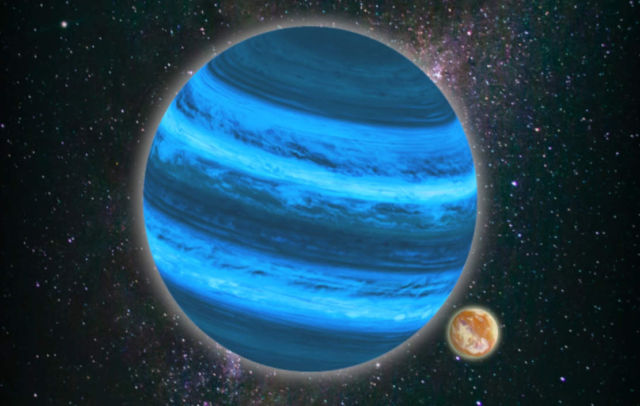 The moons of rogue exoplanets that don’t have stars could have water and be a good place to find life.

The moons of planets that have no parent star can possess an atmosphere and retain liquid water. Astrophysicists at LMU have calculated that such systems could harbor sufficient water to make life possible – and sustain it.

Water – in liquid form – is the elixir of life. It made life possible on Earth and is indispensable for the continuing existence of living systems on the planet. This explains why scientists are constantly on the lookout for evidence of water on other solid bodies in the Universe. Up to now, however, the existence of liquid water on planets other than Earth has not been directly proven. However, there are indications that several moons in the outer reaches of our own solar system – more specifically, Saturn’s Enceladus and three of Jupiter’s moons (Ganymede, Callisto and Europa) may possess subterranean oceans. What then are the prospects for the detection of water on the moons of planets beyond our solar system?

In cooperation with colleagues at the University of Concepción in Chile, LMU physicists Prof. Barbara Ercolano and Dr. Tommaso Grassi (both of whom are members of ORIGINS, a Cluster of Excellence) have now used mathematical methods to model the atmosphere and gas-phase chemistry of a moon in orbit around a free-floating planet (FFP). An FFP is a planet that is not associated with a star.

Illustration of a planet floating freely through the universe with a moon that can store water. | © Tommaso Grassi / LMU