Listen to the strange Radio Emission from Venus

Listen to the strange Radio Emission from Venus 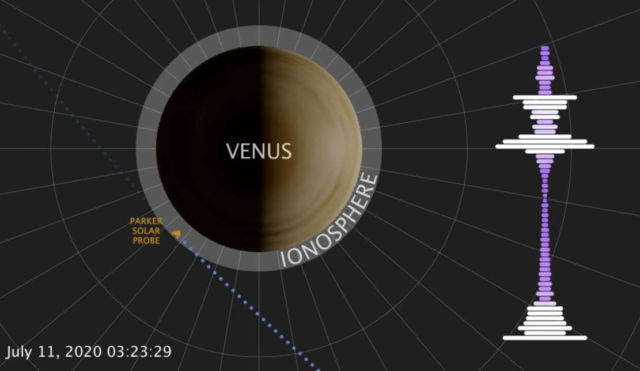 During a brief swing by Venus, NASA’s Parker Solar Probe detected a natural radio signal that revealed the spacecraft had flown through the planet’s upper atmosphere.

This was the first direct measurement of the Venusian atmosphere in nearly 30 years — and it looks quite different from Venus’ past. A study published today in Geophysical Research Letters confirms that Venus’ upper atmosphere undergoes puzzling changes over a solar cycle, the Sun’s 11-year activity cycle. This marks the latest clue to untangling how and why Venus and Earth are so different.

The data sonification in the video translates data from Parker Solar Probe’s FIELDS instrument into sound. FIELDS detected a natural, low-frequency radio emission as it moved through Venus’ atmosphere that helped scientists calculate the thickness of the planet’s electrically charged upper atmosphere, called the ionosphere. Understanding how Venus’ ionosphere changes will help researchers determine how Venus, once so similar to Earth, became the world of scorching, toxic air it is today.