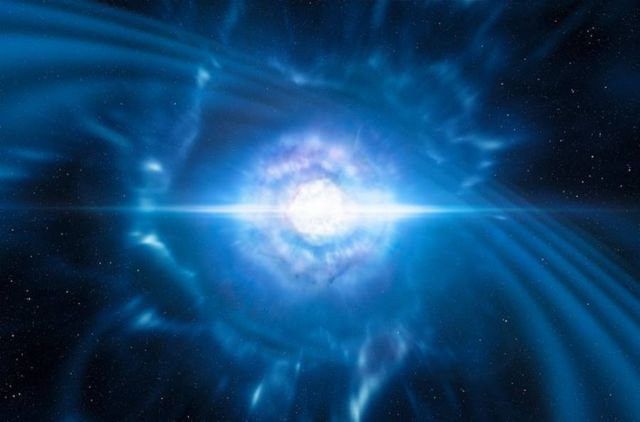 First light from gravitational wave source observed. Astronomers across the world photographed the event of the collision between two neutron stars, 130 million light-years away.

For the first time ever, astronomers have observed both gravitational waves and light (electromagnetic radiation) from the same event, thanks to a global collaborative effort and the quick reactions of both ESO’s facilities and others around the world.

Above, this artist’s impression shows two tiny but very dense neutron stars at the point at which they merge and explode as a kilonova. Such a very rare event is expected to produce both gravitational waves and a short gamma-ray burst, both of which were observed on 17 August 2017 by LIGO–Virgo and Fermi/INTEGRAL respectively. Subsequent detailed observations with many ESO telescopes confirmed that this object, seen in the galaxy NGC 4993 about 130 million light-years from the Earth, is indeed a kilonova. Such objects are the main source of very heavy chemical elements, such as gold and platinum, in the Universe.  Credit: ESO/L. Calçada/M. Kornmesser

Laser Interferometer Gravitational-Wave Observatory (LIGO), 70 observatories from every continent on Earth, including Antarctica, managed to observe the merger. Thousands of scientists around the world are now making breakthroughs, on the behavior of neutron stars and the origin of rare elements like gold and uranium. 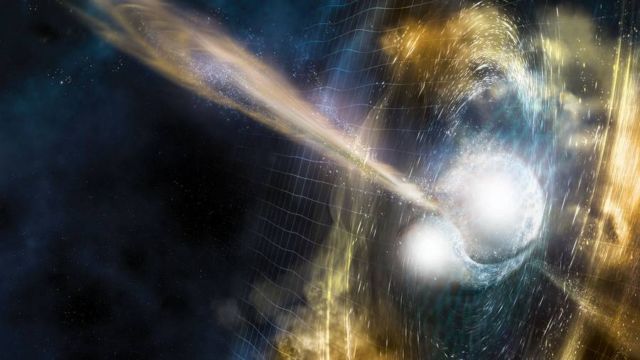 From LIGO: “Artist’s illustration of two merging neutron stars. The narrow beams represent the gamma-ray burst while the rippling spacetime grid indicates the isotropic gravitational waves that characterize the merger. Swirling clouds of material ejected from the merging stars are a possible source of the light that was seen at lower energies.” Image: National Science Foundation/LIGO/Sonoma State University/A. Simonnet

There are rare occasions when a scientist has the chance to witness a new era at its beginning,” said Elena Pian, astronomer with INAF, Italy, and lead author of one of the Nature papers. “ This is one such time!”

ESO launched one of the biggest ever “target of opportunity” observing campaigns and many ESO and ESO-partnered telescopes observed the object over the weeks following the detection.

The ripples in spacetime known as gravitational waves are created by moving masses, but only the most intense, created by rapid changes in the speed of very massive objects, can currently be detected. One such event is the merging of neutron stars, the extremely dense, collapsed cores of high-mass stars left behind after supernovae. These mergers have so far been the leading hypothesis to explain short gamma-ray bursts. An explosive event 1000 times brighter than a typical nova — known as a kilonova — is expected to follow this type of event.


The almost simultaneous detections of both gravitational waves and gamma rays from GW170817 raised hopes that this object was indeed a long-sought kilonova and observations with ESO facilities have revealed properties remarkably close to theoretical predictions. Kilonovae were suggested more than 30 years ago but this marks the first confirmed observation.