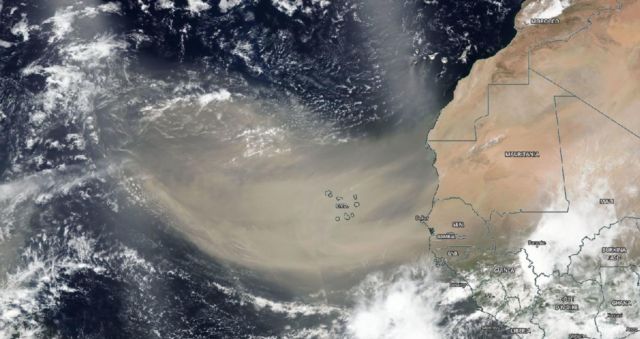 On June 18, 2020, NASA-NOAA’s Suomi NPP satellite captured this visible image of the large light brown plume of Saharan dust over the North Atlantic Ocean. The image showed that the dust from Africa’s west coast extended almost to the Lesser Antilles in the western North Atlantic Ocean.  Credits: NASA Worldview

At NASA’s Goddard Space Flight Center in Greenbelt, Maryland, Colin Seftor, an atmospheric scientist, created an animation of the dust and aerosols from the plume using data from instruments that fly aboard the Suomi NPP satellite.

“The animation runs from June 13 to 18 and shows a massive Saharan dust cloud that formed from strong atmospheric updrafts that was then picked up by the prevailing westward winds and is now being blown across the Atlantic and, eventually over North and South America,” Seftor said. “The dust is being detected by the aerosol index measurements from the Suomi-NPP Suomi NPP satellite’ s Ozone Mapping and Profiler Suite (OMPS) data overlaid over visible imagery from the Visible Infrared Imaging Radiometer Suite (VIIRS).

This animation shows the aerosols in the giant plume of Saharan Dust blowing off the western coast of Africa on June 13 through 18, 2020. This aerosol index was created from the NASA-NOAA Suomi NPP satellite’ s Ozone Mapping and Profiler Suite (OMPS) data overlaid over visible imagery from the Visible Infrared Imaging Radiometer Suite (VIIRS).  Credits: NASA/NOAA, Colin Seftor