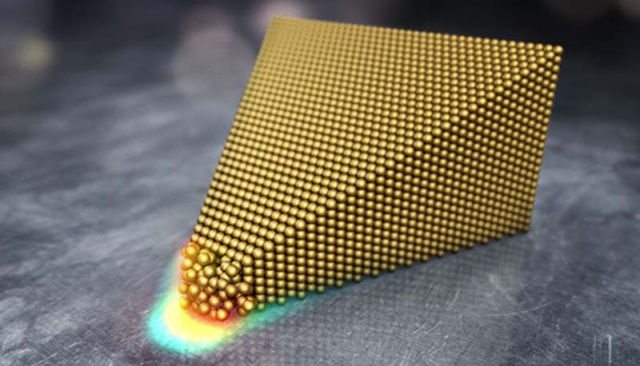 Scientists have found a way to melt gold at room temperature.

Using an electric field and an electron microscope, a team of researchers from Chalmers’ Department of Physics, has found a way to melt gold at room temperature.

The above illustration shows the atoms of a gold cone exposed to a strong electric field. We also see the field (around the tip of the cone) that excites the gold atoms. They break almost all their connections to each other and the surface layers begin to melt.​  Credit Alexander Ericson

Ludvig de Knoop placed a small piece of gold in an electron microscope. Observing it at the highest level of magnification and increasing the electric field step-by-step to extremely high levels, he was interested to see how it influenced the gold atoms.
It was when he studied the atoms in the recordings from the microscope, that he saw something exciting. The surface layers of gold had actually melted – at room temperature.

“I was really stunned by the discovery. This is an extraordinary phenomenon, and it gives us new, foundational knowledge of gold.”

What happened was that the gold atoms became excited. Under the influence of the electric field, they suddenly lost their ordered structure and released almost all their connections to each other.
Upon further experimentation, the researchers discovered that it was also possible to switch between a solid and a molten structure.