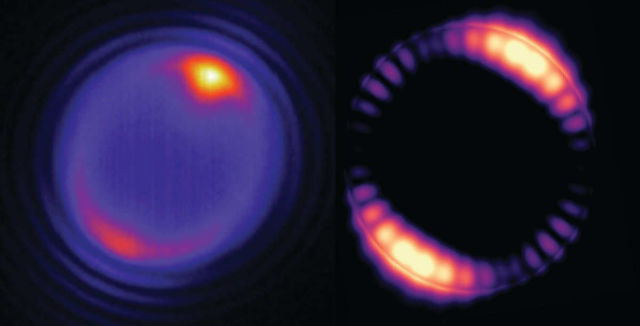 The innovation, discovered by an international team of scientists at the U.S. Department of Energy’s Lawrence Berkeley Laboratory (Berkeley Lab).

These microlasers can constantly and stably emit light for hours at a time, even when submerged in biological fluids such as blood serum. They convert infrared light into light at higher frequencies and they are among the smallest continuously emitting lasers of their kind ever reported.

Above, at left, a tiny bead struck by a laser (at the yellowish spot shown at the top of the image) produces optical modes that circulate around the interior of the bead (pinkish ring). At right, a simulation of how the optical field inside a 5-micron (5 millionths of a meter) bead is distributed.  Credit: Angel Fernandez-Bravo/Berkeley Lab, Kaiyuan Yao

This opens up the possibility for imaging or controlling biological activity with infrared light, and for the fabrication of light-based computer chips. Their findings are detailed in a report published online June 18 in Nature Nanotechnology.

The unique properties of these lasers, measuring 5 microns (millionths of a meter) across, were discovered by accident as researchers were studying the potential for the polymer (plastic) beads, composed of a translucent substance known as a colloid, to be used in brain imaging.