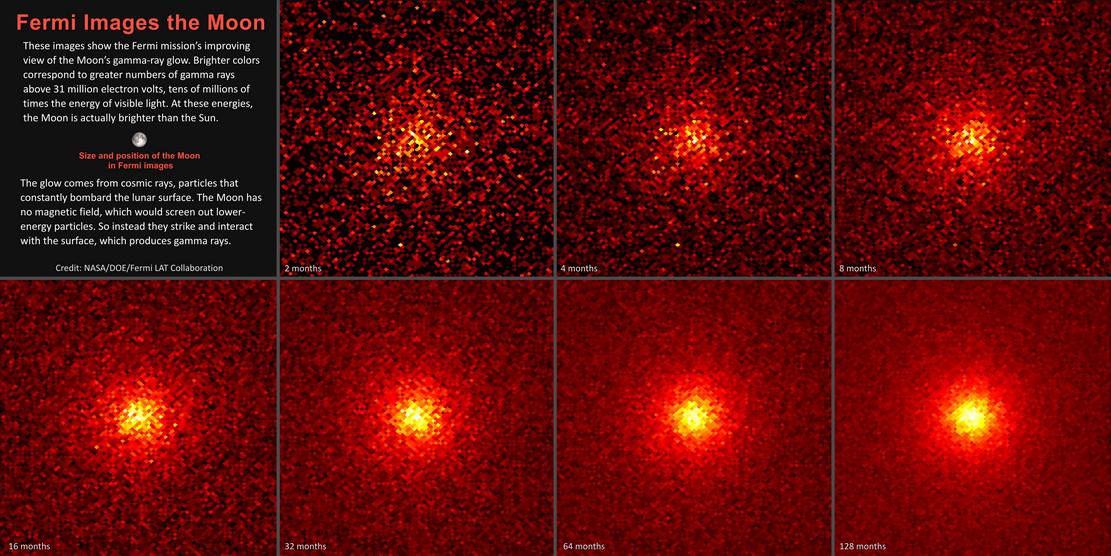 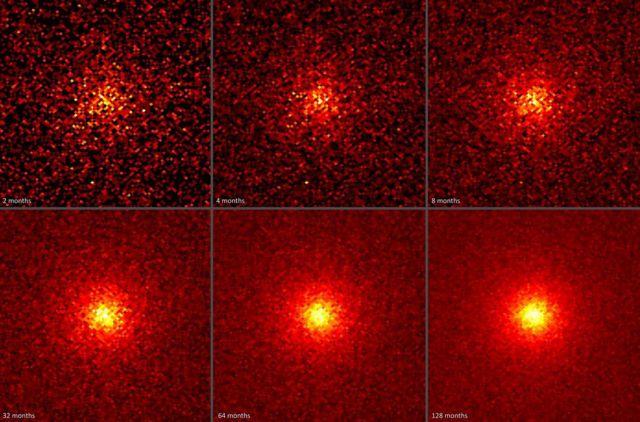 If our eyes could see high-energy radiation called gamma rays, the Moon would appear brighter than the Sun!

That’s how NASA’s Fermi Gamma-ray Space Telescope has seen our neighbor in space for the past decade.

Gamma-ray observations are not sensitive enough to clearly see the shape of the Moon’s disk or any surface features. Instead, Fermi’s Large Area Telescope (LAT) detects a prominent glow centered on the Moon’s position in the sky.

Mario Nicola Mazziotta and Francesco Loparco, both at Italy’s National Institute of Nuclear Physics in Bari, have been analyzing the Moon’s gamma-ray glow as a way of better understanding another type of radiation from space: fast-moving particles called cosmic rays.

“Cosmic rays are mostly protons accelerated by some of the most energetic phenomena in the universe, like the blast waves of exploding stars and jets produced when matter falls into black holes,” explained Mazziotta.

Because the particles are electrically charged, they’re strongly affected by magnetic fields, which the Moon lacks. As a result, even low-energy cosmic rays can reach the surface, turning the Moon into a handy space-based particle detector. When cosmic rays strike, they interact with the powdery surface of the Moon, called the regolith, to produce gamma-ray emission. The Moon absorbs most of these gamma rays, but some of them escape.

Mazziotta and Loparco analyzed Fermi LAT lunar observations to show how the view has improved during the mission. They rounded up data for gamma rays with energies above 31 million electron volts — more than 10 million times greater than the energy of visible light — and organized them over time, showing how longer exposures improve the view.

“Seen at these energies, the Moon would never go through its monthly cycle of phases and would always look full,” said Loparco.

Top image: These images show the steadily improving view of the Moon’s gamma-ray glow from NASA’s Fermi Gamma-ray Space Telescope. Each 5-by-5-degree image is centered on the Moon and shows gamma rays with energies above 31 million electron volts, or tens of millions of times that of visible light. At these energies, the Moon is actually brighter than the Sun. Brighter colors indicate greater numbers of gamma rays. This image sequence shows how longer exposure, ranging from two to 128 months (10.7 years), improved the view.   Credits: NASA/DOE/Fermi LAT Collaboration