Record Wildfires in the Brazilian Rainforest

Record Wildfires in the Brazilian Rainforest 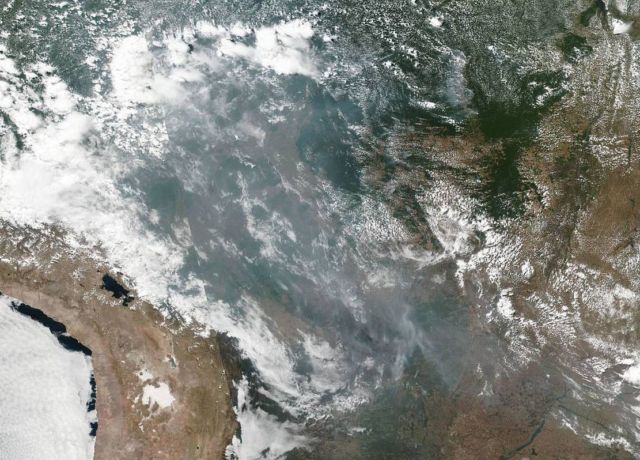 A natural-color satellite image of wildfires in the Brazilian Rainforest, creating cross country smoke in several states within Brazil including Amazonas, Mato Grosso, and Rondônia.

The image was collected by NOAA/NASA’s Suomi NPP using the VIIRS (Visible Infrared Imaging Radiometer Suite) instrument on August 20, 2019.  It is not unusual to see fires in Brazil at this time of year due to high temperatures and low humidity. Time will tell if this year is a record breaking or just within normal limits.

The fires, which have increased by 83% since 2018, have caused massive devastation and sparked concerns that the blazes could accelerate climate change.

Aerosol Optical Thickness Updating Forecast. The atmosphere is made up of gases like oxygen, nitrogen, and water vapor, but it also contains tiny particles called aerosols. Aerosols come from both natural and human sources and include things like sea salt, dust, soot, and sulfates.