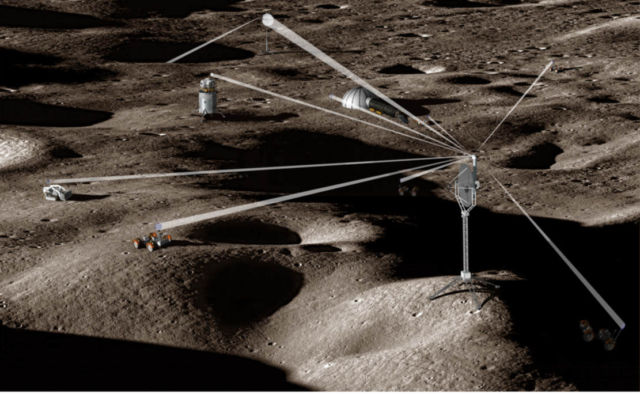 Light Bender is a novel concept for the generation and distribution of power on the lunar surface.

Light Bender project within the context of the Artemis mission and the “Long-Term Human Lunar Surface Presence” that will follow.

The innovative concept is based on a heliostat that utilizes Cassegrain telescope optics as the primary means to capture, concentrate and focus the sun‘s light. A second key innovation is the use of a Fresnel lens to collimate this light for distribution to multiple end users at distances of a kilometer or more away without substantial losses.

The redirected and concentrated solar energy is then converted to electricity at the end user’s location using small (2m-4m diameter) photovoltaic arrays that can be mounted on habitats, cryo-coolers, or mobile assets such as rovers or ISRU elements.

This concept is superior to alternatives such as highly inefficient Laser Power Beaming, as it only converts light to electricity once, and to traditional power distribution architectures that rely on mass intensive cables.

The value proposition of Light Bender is an ~5x mass reduction in mass over traditional technological solutions such as Laser Power Beaming or a distribution network predicated on high voltage power cables.