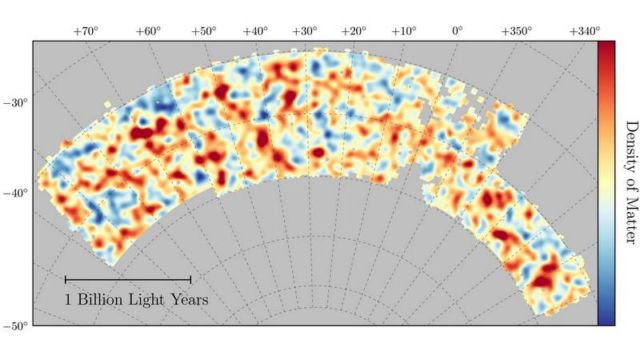 New scientific result confirmed that dark matter and dark energy make up most of the cosmos, after precision of cosmic microwave background measurements.

Above, map of dark matter made from gravitational lensing measurements of 26 million galaxies in the Dark Energy Survey. The map covers about 1/30th of the entire sky and spans several billion light-years in extent. Red regions have more dark matter than average, blue regions less dark matter.  Image credit Chihway Chang of the Kavli Institute for Cosmological Physics at the University of Chicago and the DES collaboration.

Imagine planting a single seed and, with great precision, being able to predict the exact height of the tree that grows from it. Now imagine traveling to the future and snapping photographic proof that you were right.

If you think of the seed as the early universe, and the tree as the universe the way it looks now, you have an idea of what the Dark Energy Survey (DES) collaboration has just done. In a presentation today at the American Physical Society Division of Particles and Fields meeting at the U.S. Department of Energy’s (DOE) Fermi National Accelerator Laboratory, DES scientists will unveil the most accurate measurement ever made of the present large-scale structure of the universe. 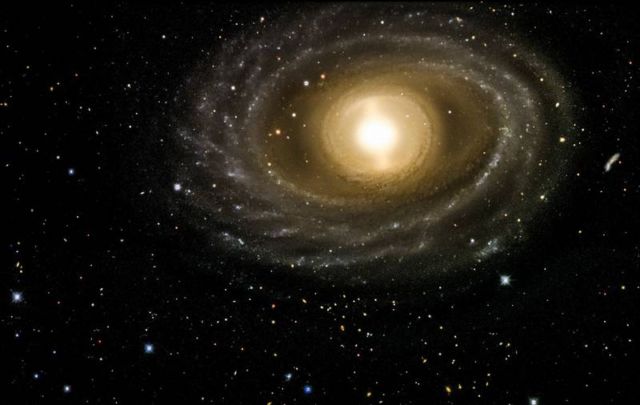 This image of the NGC 1398 galaxy was taken with the Dark Energy Camera. This galaxy lives in the Fornax cluster, roughly 65 million light-years from Earth. It is 135,000 light-years in diameter, just slightly larger than our own Milky Way galaxy, and contains more than a billion stars.   Image credit Dark Energy Survey

These measurements of the amount and “clumpiness” (or distribution) of dark matter in the present-day cosmos were made with a precision that, for the first time, rivals that of inferences from the early universe by the European Space Agency’s orbiting Planck observatory. The new DES result (the tree, in the above metaphor) is close to “forecasts” made from the Planck measurements of the distant past (the seed), allowing scientists to understand more about the ways the universe has evolved over 14 billion years.

Scott Dodelson of Fermilab, one of the lead scientists on this result, said:

“This result is beyond exciting. For the first time, we’re able to see the current structure of the universe with the same clarity that we can see its infancy, and we can follow the threads from one to the other, confirming many predictions along the way.”