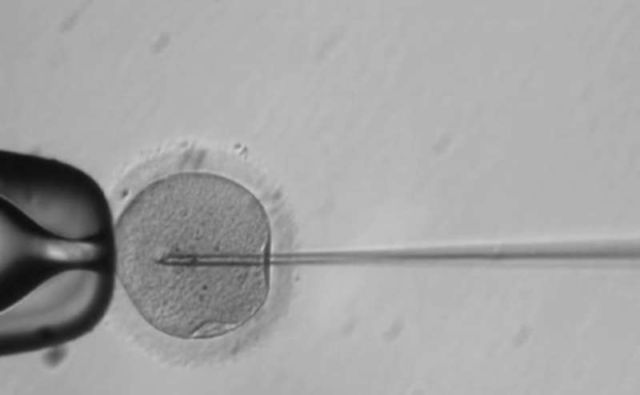 For the first time in the U.S. scientists have demonstrated they can efficiently improve the DNA of human embryos.

A team of researchers in Portland, Oregon, just concluded the first known attempt at creating genetically modified human embryos in the United States.

Above, gene-editing chemicals being injected into a human egg at the moment of fertilization. Scientists used the technique to correct DNA errors present in the father’s sperm.

The effort, led by Shoukhrat Mitalipov of Oregon Health and Science University, involved changing the DNA of a large number of one-cell embryos with the gene-editing technique CRISPR, according to people familiar with the scientific results.

The process is termed “germline engineering” because any genetically modified child would then pass the changes on to subsequent generations via their own germ cells—the egg and sperm.

A scientist familiar with the project, said:

“It is proof of principle that it can work. They significantly reduced mosaicism. I don’t think it’s the start of clinical trials yet, but it does take it further than anyone has before.”