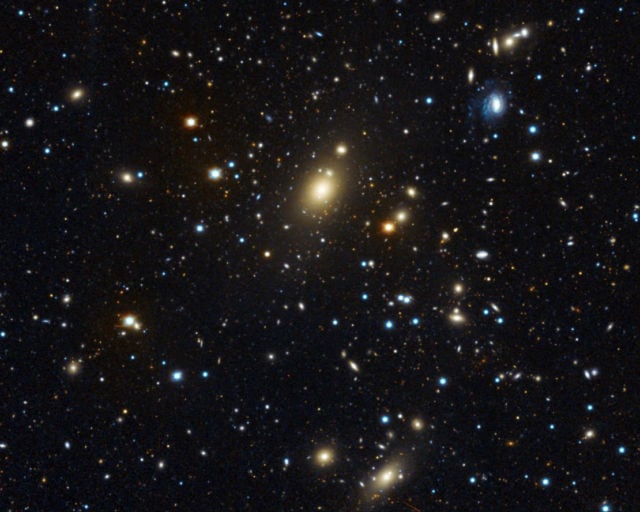 Astronomers discover the most massive black hole in the nearby universe, with amazing 40 billion solar masses.

In space, black holes appear in different sizes and masses. The record is now held by a specimen in the Abell 85 cluster of galaxies, where an ultra-massive black hole with 40 billion times the mass of our Sun sits in the middle of the central galaxy Holm 15A. Astronomers around Ralf Bender’s research group at the Max Planck Institute for Extraterrestrial Physics and at the University Observatory discovered this by evaluating photometric data as well as new spectral observations with the Very Large Telescope.

Even though the central galaxy of the cluster Abell 85 has the enormous visible mass of about 2 trillion (10^12) solar masses in stars, the centre of the galaxy is extremely diffuse and faint. This is why a joint group of astronomers at the Max Planck Institute for Extraterrestrial Physics (MPE) and the University Observatory Munich (USM) got interested in the galaxy. This central diffuse region in the galaxy is almost as large as the Large Magellanic Cloud, and this was a suspicious clue for the presence of a black hole with a very high mass.

The Abell 85 cluster of galaxies, which consists of more than 500 individual galaxies, is at a distance of 700 million lightyears from Earth, twice the distance for previous direct black hole mass measurements. “There are only a few dozen direct mass measurements of supermassive black holes, and never before has it been attempted at such a distance,” explains MPE scientist Jens Thomas, who led the study. “But we already had some idea of the size of the Black Hole in this particular galaxy, so we tried it.”

The new data obtained at the USM Wendelstein observatory of the Ludwig-Maximilians-University and with the MUSE instrument at the VLT allowed the team to perform a mass estimate based directly on the stellar motions around the core of the galaxy. With a mass of 40 billion solar masses, this is the most massive black hole known today in the local universe. “This is several times larger than expected from indirect measurements, such as the stellar mass or the velocity dispersion of the stars” remarks Roberto Saglia, senior scientist MPE and lecturer at the LMU.

The light profile of the galaxy shows a centre with an extremely low and very diffuse surface brightness, much fainter than in other elliptical galaxies. “The light profile in the inner core is also very flat,” explains LMU doctoral student Kianusch Mehrgan, who performed part of the data analysis. “This means that most of the stars in the centre must have been expelled due to interactions in previous mergers.”