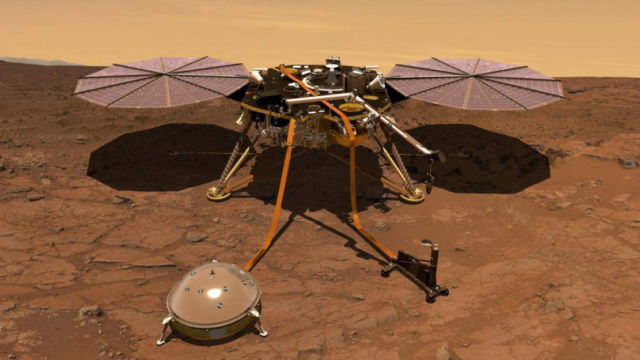 During nighttime conditions near midnight local time, long pulsation trains are occasionally detected in the magnetic field. These can last as long as two hours and have wave periods of longer than 1 minute.
These waves are strongest in the north direction and weakest vertically.

These measurements have important implications for future Mars exploration. The ionospheric currents and the wavetrains seen near midnight may enable future electromagnetic sounding of the martian interior.

These can be implemented with geomagnetic arrays or rovers. The strong magnetization seen in the surface rocks indicates that much can be learned about the dynamics of the crust from magnetometers carried on rovers.

This is the first operating magnetometer on the Mars surface. The data are regularly transmitted at 0.2 Hz and stored on the spacecraft at 20 Hz for later transmission if needed. The range of the magnetometer is ±20,000 nT in each of the three directions. The sensors are oriented positive northward, positive eastward and positive downward. It operates continuously day and night.

The field at the InSight landing site is strong. Models of the martian magnetic field at the landing site based on orbital surveys ranged from 19 nT to -243 nT in the north direction, 350 nT to -25 nT in the east vdirection, and -205 nT to -30 nT in the downward direction, for an average of (-70, 97, -154) nT. The surface field far exceeded this. This field is aligned within 27° of the average extrapolated magnetic field from the five models that have been published on the analyses of the measured fields from Mars orbiters.
This result is to be expected if the surface of Mars is strongly magnetized. The InSight field is probably the leakage flux from excavated or demagnetized regions of this magnetized crust. These leakage fields should be roughly aligned with the magnetization in the crustal rocks and be strongest near excavated or degmagnetized regions while the orbital measurements will not sense the small-scale “leakage” fields and therefore report weaker average fields.

While the surface field at InSight is much stronger than the field at high altitudes, it is very consistent in direction with the high altitude data.

Top, the InSight lander sits on the Martian surface in an illustration.  Image credit NASA