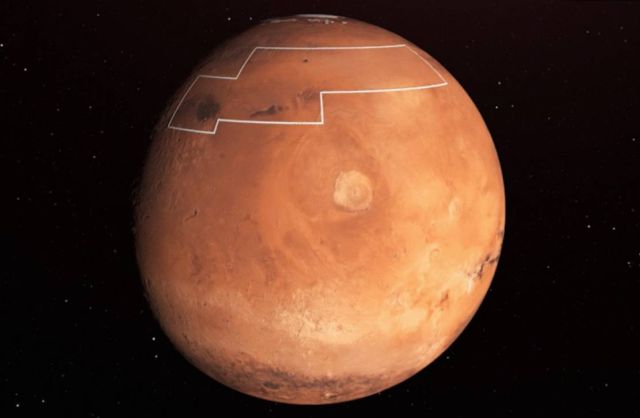 NASA releases treasure map with ‘water ice’ just below the surface of Mars, for future astronauts.

A new paper published in Geophysical Research Letters will help by providing a map of water ice believed to be as little as an inch (2.5 centimeters) below the surface.

Water ice will be a key consideration for any potential landing site. With little room to spare aboard a spacecraft, any human missions to Mars will have to harvest what’s already available for drinking water and making rocket fuel.

Top image: This rainbow-colored map shows underground water ice on Mars. Cool colors are closer to the surface than warm colors; black zones indicate areas where a spacecraft would sink into fine dust; the outlined box represents the ideal region to send astronauts for them to dig up water ice.  Credits: NASA/JPL-Caltech/ASU

NASA calls this concept “in situ resource utilization,” and it’s an important factor in selecting human landing sites on Mars. Satellites orbiting Mars are essential in helping scientists determine the best places for building the first Martian research station. The authors of the new paper make use of data from two of those spacecraft, NASA’s Mars Reconnaissance Orbiter (MRO) and Mars Odyssey orbiter, to locate water ice that could potentially be within reach of astronauts on the Red Planet.

“You wouldn’t need a backhoe to dig up this ice. You could use a shovel,” said the paper’s lead author, Sylvain Piqueux of NASA’s Jet Propulsion Laboratory in Pasadena, California. “We’re continuing to collect data on buried ice on Mars, zeroing in on the best places for astronauts to land.”