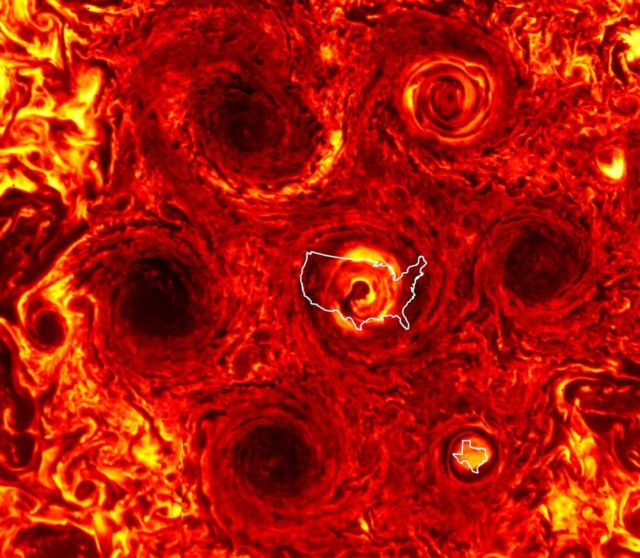 Six cyclones can be seen at Jupiter’s south pole in this infrared image taken by NASA’s Juno spacecraft.

Jupiter‘s south pole has a new cyclone. The discovery of the massive Jovian tempest occurred on Nov. 3, 2019, during the most recent data-gathering flyby of Jupiter by NASA’s Juno spacecraft. It was the 22nd flyby during which the solar-powered spacecraft collected science data on the gas giant, soaring only 2,175 miles (3,500 kilometers) above its cloud tops. The flyby also marked a victory for the mission team, whose innovative measures kept the solar-powered spacecraft clear of what could have been a mission-ending eclipse.

“The combination of creativity and analytical thinking has once again paid off big time for NASA,” said Scott Bolton, Juno principal investigator from the Southwest Research Institute in San Antonio. “We realized that the orbit was going to carry Juno into Jupiter’s shadow, which could have grave consequences because we’re solar powered. No sunlight means no power, so there was real risk we might freeze to death. While the team was trying to figure out how to conserve energy and keep our core heated, the engineers came up with a completely new way out of the problem: Jump Jupiter’s shadow. It was nothing less than a navigation stroke of genius. Lo and behold, first thing out of the gate on the other side, we make another fundamental discovery.” 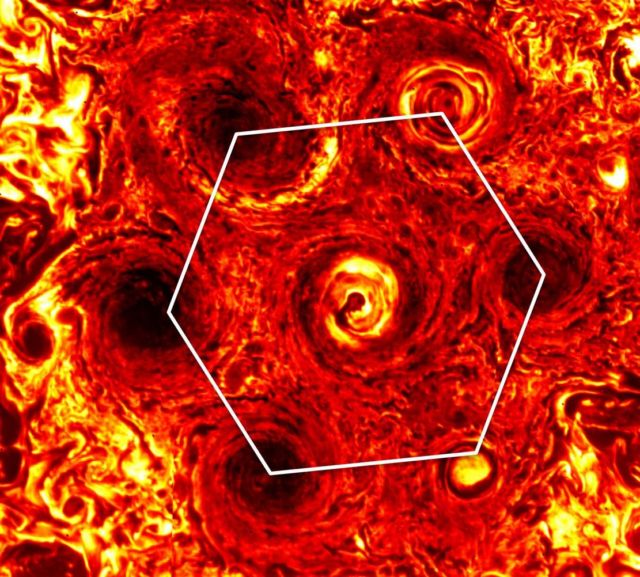 When Juno first arrived at Jupiter in July 2016, its infrared and visible-light cameras discovered giant cyclones encircling the planet’s poles – nine in the north and six in the south. Were they, like their Earthly siblings, a transient phenomenon, taking only weeks to develop and then ebb? Or could these cyclones, each nearly as wide as the continental U.S., be more permanent fixtures?