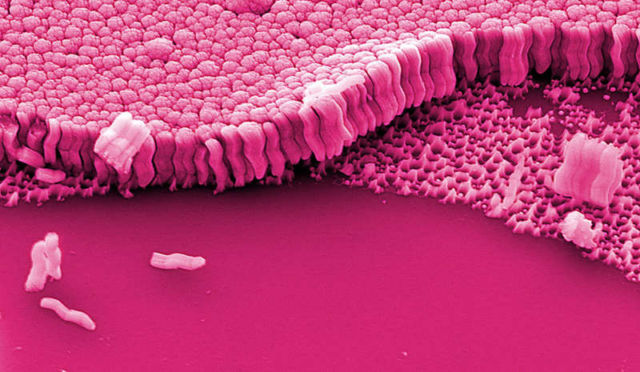 Scientists developed a new type of metallic glass, a class of materials made from complex alloys.

Yale researchers have discovered they can create new materials, with potentially new applications, by shrinking samples of metallic glass to nanoscale size.

Metallic glasses are a relatively new class of materials made from complex, multicomponent alloys. They have the moldable pliability of plastics, but the strengths of metals.

When metallic glasses cool from a liquid to a solid, their atoms settle into a random arrangement and do not crystallize the way traditional metals do. Cha said they discovered a new form of metallic glasses by making metallic-glass rods so small that there is no room for the nuclei — a phenomenon the researchers call “nucleus starvation” — leading to a new crystalline phase. The rods are less than 35 nanometers in diameter, more than 2,000 times smaller than a human hair.

“This gives us a handle to control the number of nuclei we provide in the sample. When it doesn’t have any nuclei — despite the fact that nature tells us that there should be one — it generates this brand new crystalline phase that we’ve never seen before. It’s a way to create a new material out of the old.”

The research, published in Nature Communications