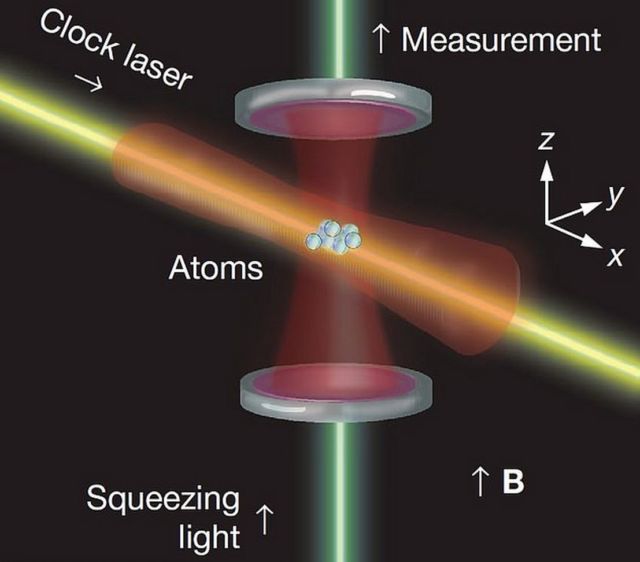 New type of atomic clock is less than a tenth of a second out after 14 Billion years, accurate.

Atomic clocks working by measuring with lasers the periodic oscillation of atoms.

The new design reduces the quantum uncertainties that limit their precision, by ‘entangling’ the measured atoms. This could help scientists study gravity’s effect on time.

The best atomic clocks in the world keep time with such precision that, if they had been running since the beginning of the universe, they would only be off by about half a second today.

Still, they could be even more precise. If atomic clocks could more accurately measure atomic vibrations, they would be sensitive enough to detect phenomena such as dark matter and gravitational waves. With better atomic clocks, scientists could also start to answer some mind-bending questions, such as what effect gravity might have on the passage of time and whether time itself changes as the universe ages. 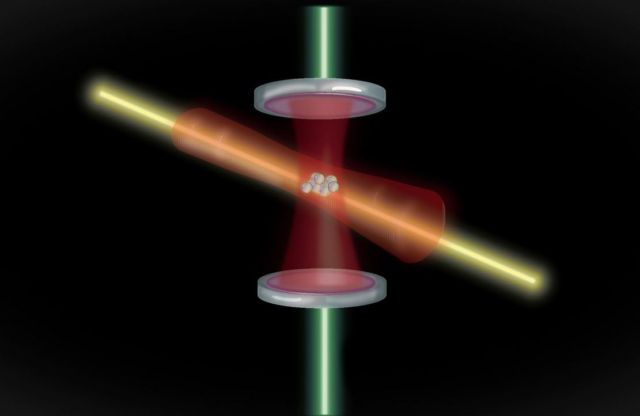 Atoms are trapped in an optical cavity composed of two mirrors. When a “squeezing” laser is set through the cavity, the atoms are entangled, and their frequency is measured with a second laser, as a platform for more precise atomic clocks.  Image courtesy of the researchers

Now a new kind of atomic clock designed by MIT physicists may enable scientists to explore such questions and possibly reveal new physics.

The researchers report today in the journal Nature that they have built an atomic clock that measures not a cloud of randomly oscillating atoms, as state-of-the-art designs measure now, but instead atoms that have been quantumly entangled. The atoms are correlated in a way that is impossible according to the laws of classical physics, and that allows the scientists to measure the atoms’ vibrations more accurately.

The new setup can achieve the same precision four times faster than clocks without entanglement.

“Entanglement-enhanced optical atomic clocks will have the potential to reach a better precision in one second than current state-of-the-art optical clocks,” says lead author Edwin Pedrozo-Peñafiel, a postdoc in MIT’s Research Laboratory of Electronics.