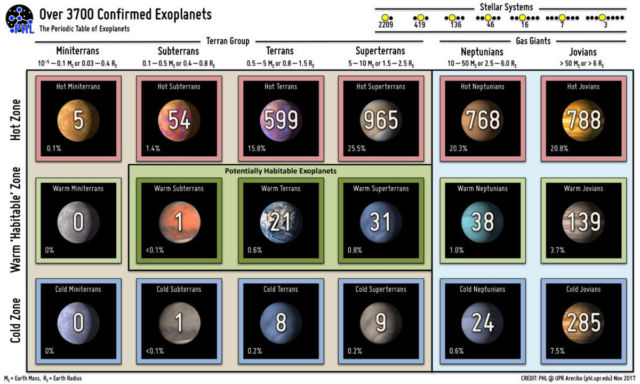 The Periodic Table of Exoplanets divides most of the known exoplanets into six mass/size and three temperatures groups for visualization purposes (18 categories total).

Exoplanets in the Hot Zone are too close of their parent star to have liquid water. Those in the Warm ‘Habitable’ Zone have the right distance for liquid water given the right size and atmosphere. Water can only exist as ice for those in the Cold Zone.

Miniterrans are low mass bodies most likely spherical and without atmospheres, similar to Mercury and the Moon. Subterrans are comparable to Mars, Terrans to Earth and Venus, and Superterrans are a transition group between terrans and neptunians. Neptunians are similar in mass to Neptune and Uranus, and Jovians to Jupiter and Saturn, or larger.

Not all bodies stated in the objects count in the title are classified in the table due to unknown stellar or planetary parameters. Those potentially habitable are described with more details in the Habitable Exoplanet Catalog (HEC).

At the New Periodic Table current confirmed exoplanets classified into eighteen thermal-mass categories. The number of exoplanets in each category is shown in the center of each frame and as a percent in the lower left. The diagram also shows the number of multiple stellar systems (top right). The most abundant objects of the confirmed exoplanets are hot jovians. RE = Earth radii, ME = Earth masses.