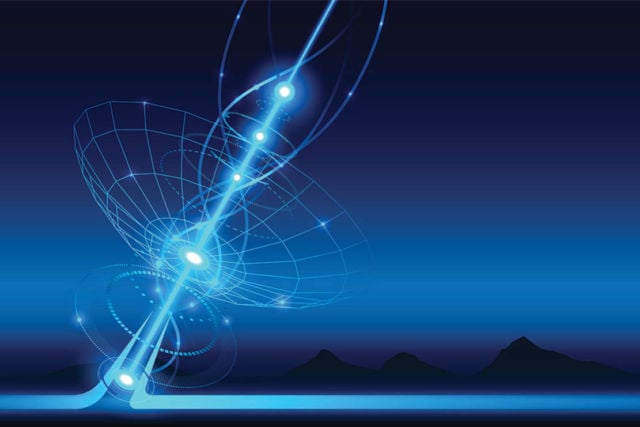 Scientists have developed a new type of laser beam that doesn’t follow long-held principles about how light refracts and travels.

The findings, by University of Central Florida researchers, could have huge implications for optical communication and laser technologies.

“This new class of laser beams has unique properties that are not shared by common laser beams,” says Ayman Abouraddy, a professor in UCF’s College of Optics and Photonics and the study’s principal investigator.

The beams, known as spacetime wave packets, follow different rules when they refract, that is when they pass through different materials. Normally, light slows down when it travels into a denser material.

“In contrast, spacetime wave packets can be arranged to behave in the usual manner, to not change speed at all, or even to anomalously speed up in denser materials,” Abouraddy says. “As such, these pulses of light can arrive at different points in space at the same time.”

“Think about how a spoon inside a water-filled glass looks broken at the point where the water and air meet,” Abouraddy says. “The speed of light in air is different from the speed of light in water. And so, the light rays wind up bending after they cross the surface between air to water, and so apparently the spoon looks bent. This is a well-known phenomenon described by Snell’s Law.”

For communication, this means the speed of a message traveling in these packets is no longer affected by traveling through different materials of different densities.

The findings were published in Nature Photonics