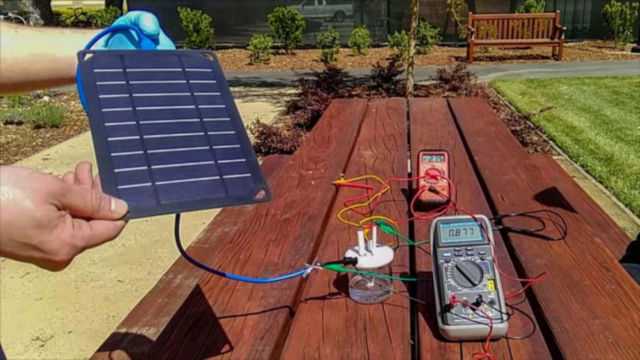 Splitting water into hydrogen and oxygen presents an alternative to fossil fuels, but purified water is a precious resource and costly to produce. A Stanford-led team has now developed a way to harness seawater – Earth’s most abundant source – for chemical energy.

Hongjie Dai, J.G. Jackson and C.J. Wood professor in chemistry in Stanford’s School of Humanities and Sciences and co-senior author on the paper, said:

“Theoretically, to power cities and cars, you need so much hydrogen it is not conceivable to use purified water. We barely have enough water for our current needs in California.”

As a concept, splitting water into hydrogen and oxygen with electricity – called electrolysis – is a simple and old idea: a power source connects to two electrodes placed in water. When power turns on, hydrogen gas bubbles out of the negative end – called the cathode – and breathable oxygen emerges at the positive end – the anode.

But negatively charged chloride in seawater salt can corrode the positive end, limiting the system’s lifespan. Dai and his team wanted to find a way to stop those seawater components from breaking down the submerged anodes.

The researchers discovered that if they coated the anode with layers that were rich in negative charges, the layers repelled chloride and slowed down the decay of the underlying metal.

They layered nickel-iron hydroxide on top of nickel sulfide, which covers a nickel foam core. The nickel foam acts as a conductor – transporting electricity from the power source – and the nickel-iron hydroxide sparks the electrolysis, separating water into oxygen and hydrogen. During electrolysis, the nickel sulfide evolves into a negatively charged layer that protects the anode. Just as the negative ends of two magnets push against one another, the negatively charged layer repels chloride and prevents it from reaching the core metal.