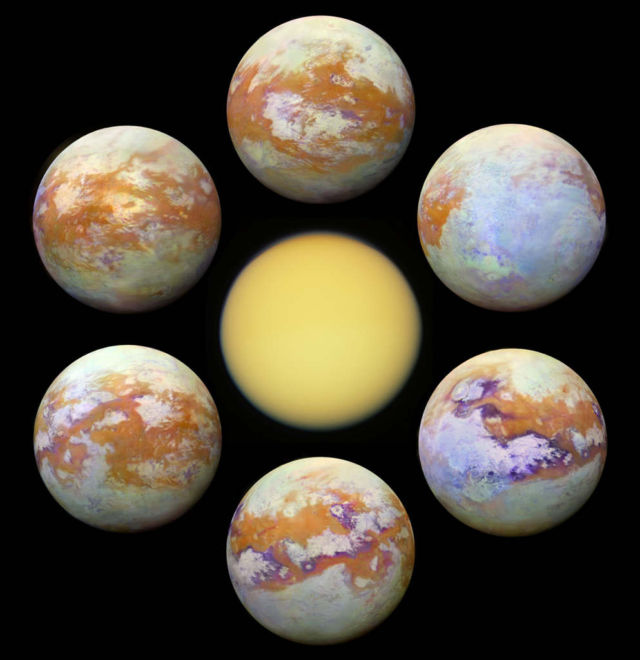 These six infrared images of Saturn‘s largest moon Titan represent some of the clearest, most seamless-looking global views of the icy moon’s surface ever produced.

Saturn’s Titan shrouded in a thick atmosphere, really is hard to see.

The views were created using 13 years of data acquired by the Visual and Infrared Mapping Spectrometer (VIMS) instrument on board NASA’s Cassini spacecraft. The images are the result of a focused effort to smoothly combine data from the multitude of different observations VIMS made under a wide variety of lighting and viewing conditions over the course of Cassini’s mission.

Observing the surface of Titan in the visible region of the spectrum is difficult, due to the globe enshrouding haze that envelops the moon. This is primarily because small particles called aerosols in Titan’s upper atmosphere strongly scatter visible light. But Titan’s surface can be more readily imaged in a few infrared “windows” — infrared wavelengths where scattering and absorption is much weaker. This is where the VIMS instrument excelled, parting the haze to obtain clear images of Titan’s surface.

For comparison, Figure 1 shows Titan as it appears in visible light, as does PIA11603.