Home/Posts/TECHNOLOGY/Space/Panorama Above ‘Perseverance Valley’
Previous Next 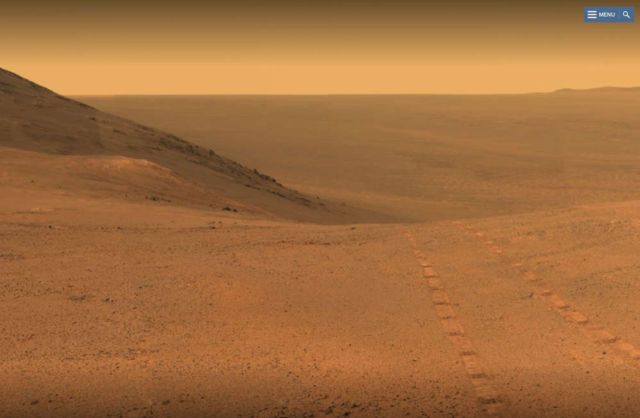 This view from the Pancam on NASA’s Opportunity Mars rover shows the area just above “Perseverance Valley” on a large crater’s rim.

A broad notch in the crest of the rim, at right, might have been a spillway for a fluid that carved the valley, out of sight on the other side of the rim.

NASA’s Mars Exploration Rover Opportunity recorded a panoramic view before entering the upper end of a fluid-carved valley that descends the inner slope of a large crater’s rim.

The scene includes a broad notch in the crest of the crater’s rim, which may have been a spillway where water or ice or wind flowed over the rim and into the crater. Wheel tracks visible in the area of the notch were left by Opportunity as the rover studied the ground there and took images into the valley below for use in planning its route.

“It is a tantalizing scene,” said Opportunity Deputy Principal Investigator Ray Arvidson of Washington University in St. Louis. “You can see what appear to be channels lined by boulders, and the putative spillway at the top of Perseverance Valley. We have not ruled out any of the possibilities of water, ice or wind being responsible.”

Opportunity’s panoramic camera (Pancam) took the component images of the scene during a two-week driving moratorium in June 2017 while rover engineers diagnosed a temporary stall in the left-front wheel’s steering actuator.