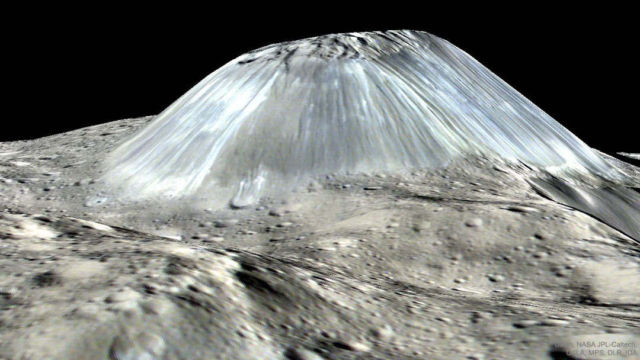 The unusual mountain Ahuna Mons is the largest mountain on the largest known asteroid in our Solar System, Ceres.

Ceres, which orbits our Sun in the main asteroid belt between Mars and Jupiter.

Ahuna Mons, though, is like nothing that humanity has ever seen before. For one thing, its slopes are garnished not with old craters but young vertical streaks.

The new hypothesis, based on numerous gravity measurements, holds that a bubble of mud rose from deep within the dwarf planet and pushed through the icy surface at a weak point rich in reflective salt — and then froze. The bright streaks are thought to be similar to other recently surfaced material such as visible in Ceres’ famous bright spots.

The featured double-height digital image was constructed from surface maps taken of Ceres in 2016 by the robotic Dawn mission. Successfully completing its mission in 2018, Dawn continues to orbit Ceres even though it has exhausted the fuel needed to keep its antennas pointed toward Earth.