PigeonBot is a soft biohybrid robot bird with morphing wings with feathers, consisting of a propeller-driven instrumented body.

Birds morph their wing planform parameters simultaneously—including sweep, span, and area—in a way that has proven to be particularly challenging to embody robotically.

To replicate this control principle in a robot, we developed a biohybrid morphing wing with real feathers to understand the underlying design principles. The outcome, PigeonBot, embodies 42 degrees of freedom that control the position of 40 elastically connected feathers via four servo-actuated wrist and finger joints. Our flight tests demonstrate that the soft feathered wings morph rapidly and robustly under aerodynamic loading. They not only enable wing morphing but also make robot interactions safer, the wing more robust to crashing, and the wing reparable via “preening.” In flight tests, we found that both asymmetric wrist and finger motion can initiate turn maneuvers—evidence that birds may use their fingers to steer in flight. 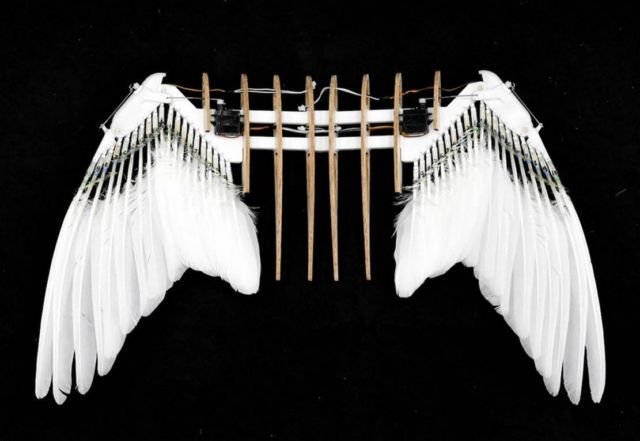 The other cool thing we found is that the morphing wing asymmetry results automatically in a steady roll angle. In contrast aircraft aileron left-right asymmetry results in a roll rate, which the pilot or autopilot then has to stop to achieve a steady roll angle. Controlling a banked turn via roll angle is much simpler than via roll rate. We think it may enable birds to fly more stably in turbulence, because wing asymmetry corresponds to an equilibrium angle that the wings automatically converge to. If you are flying in turbulence and have to control the robot or airplane attitude via roll rate in response to many stochastic perturbations, roll angle has to be actively adjusted continuously without any helpful passive dynamics of the wing. Although this finding requires more research and testing, it shows how aerospace engineers can find inspiration to think outside of the box by studying how birds fly. 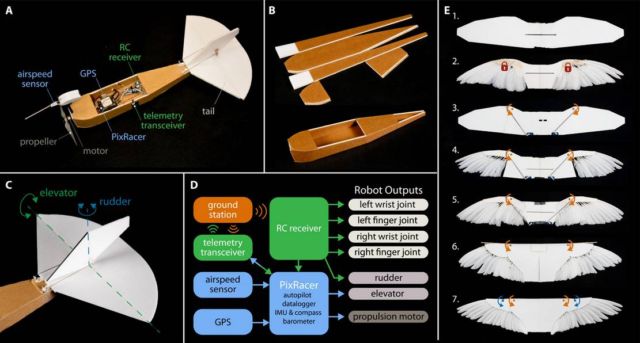