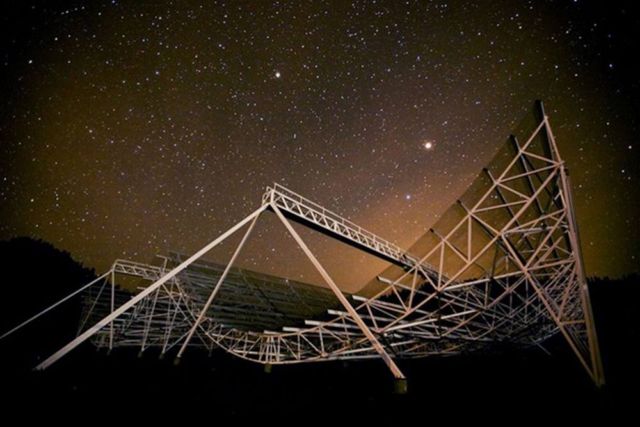 A repeating fast radio burst, extragalactic radio flashes of unknown physical origin, only the second repeating burst to be recorded.

Fast radio bursts are short flickers of radio waves that come from an unknown location outside our galaxy, and international scientists have observed the second repeating bursts ever. The burst-mapping scientists say in two papers that they have detected 13 fast radio bursts, and six repeating bursts, which all seem to come from an unknown location close to 1.5 billion light years away.

So far, only one repeating fast radio burst has been observed, called FRB 121102. In addition, the lowest radio frequency recorded previously for a FRB was 700 megahertz.

In one paper, the CHIME/FRB collaboration present 13 fast radio bursts newly detected by the CHIME (Canadian Hydrogen Intensity Mapping Experiment) instrument. At least seven of these bursts were recorded at 400 megahertz (the lowest frequency recorded so far), which the authors suggest indicates that bursts could be observed at even lower frequencies than CHIME can detect.

In the other paper, the CHIME/FRB collaboration report that one of these newly detected fast radio bursts, called FRB 180814.J0422+73, repeats — only the second such repeating burst. The authors report the detection of six repeat bursts, which seem to originate from the same location. The bursts are estimated to originate from a distance of around 1.5 billion light years, approximately half the distance of the other repeating burst, FRB 121102. The authors note some similarities between the repeating bursts, which may suggest similar emission mechanisms or propagation effects.

Given that the CHIME instrument has already detected a second repeating fast radio burst, the authors hypothesize that a substantial population of sources of repeating bursts will be detected in the future.