Saturn’s Rings from the Inside Out

Saturn’s Rings from the Inside Out 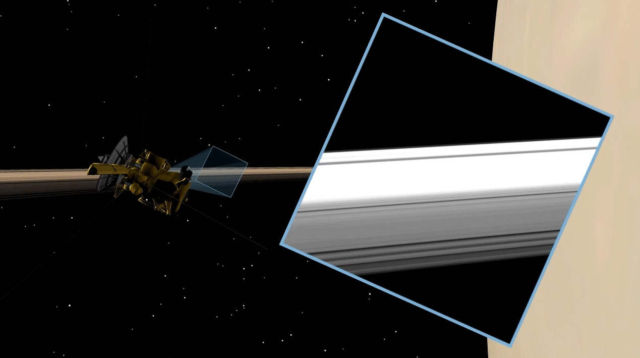 Images from the robotic spacecraft Cassini are providing humanity with this unprecedented Saturn‘s vantage point as it nears the completion of its mission.

This movie sequence of images from NASA’s Cassini spacecraft offers a unique perspective on Saturn’s ring system. Cassini captured the images from within the gap between the planet and its rings, looking outward as the spacecraft made one of its final dives through the gap as part of the mission’s Grand Finale.

Using its wide-angle camera, Cassini took the 21 images in the sequence over a span of about four minutes during its dive through the gap on Aug. 20, 2017. The images have an original size of 512 x 512 pixels; the smaller image size allowed for more images to be taken over the short span of time.

All images of Saturn’s majestic ring system were taken from outside of the rings looking in.

Cassini it is directed to dive into the giant planet on September 15.