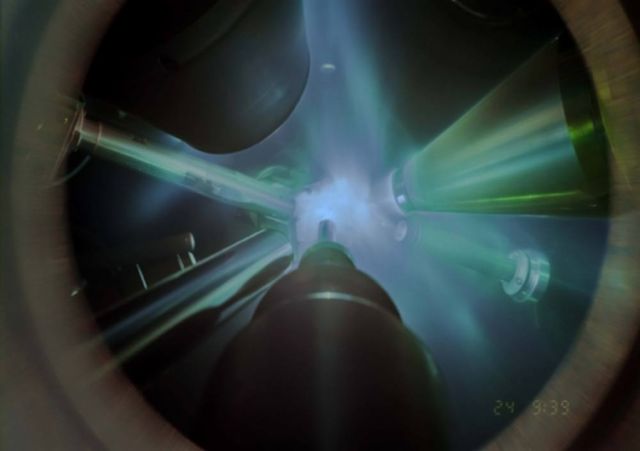 Scientists from Lawrence Livermore National Laboratory (LLNL) used giant lasers to flash-freeze water into its exotic superionic phase and record X-ray diffraction patterns to identify its atomic structure for the very first time — all in just a few billionths of a second. The findings are reported today in Nature.

Above, in this time-integrated photograph of an X-ray diffraction experiment, giant lasers focus on the water sample, sitting on the front plate of the diagnostic used to record diffraction patterns, to compress it into the superionic phase.  Credit: Millot, Coppari, Kowaluk (LLNL)

In 1988, scientists first predicted that water would transition to an exotic state of matter characterized by the coexistence of a solid lattice of oxygen and liquid-like hydrogen — superionic ice — when subjected to the extreme pressures and temperatures that exist in the interior of water-rich giant planets like Uranus and Neptune. These predictions remained in place until 2018, when a team led by scientists from LLNL presented the first experimental evidence for this strange state of water.

Now, the LLNL scientists describe new results. Using laser-driven shockwaves and in-situ X-ray diffraction, they observe the nucleation of a crystalline lattice of oxygen in a few billionths of a second, revealing for the first time the microscopic structure of superionic ice. 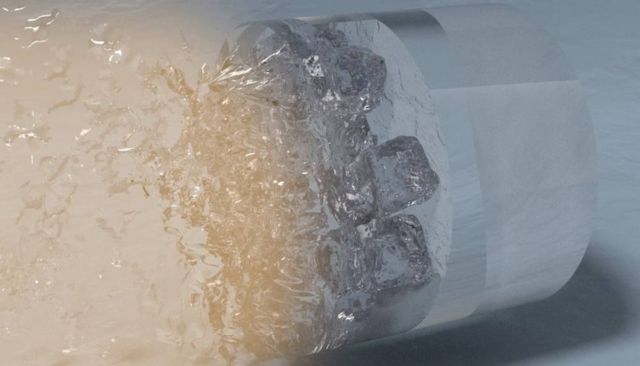 In this artistic rendering of the laser compression experiment, high power lasers focus on the surface of a diamond, generating a sequence of shock waves that propagate throughout the sample assembly (from left to right), simultaneously compressing and heating the initially liquid water sample, forcing it to freeze into the superionic water ice phase. Credit: Millot, Coppari, Hamel, Krauss (LLNL)

“We wanted to determine the atomic structure of superionic water,” said LLNL physicist Federica Coppari, co-lead author of the paper. “But given the extreme conditions at which this elusive state of matter is predicted to be stable, compressing water to such pressures and temperatures and simultaneously taking snapshots of the atomic structure was an extremely difficult task, which required an innovative experimental design.”