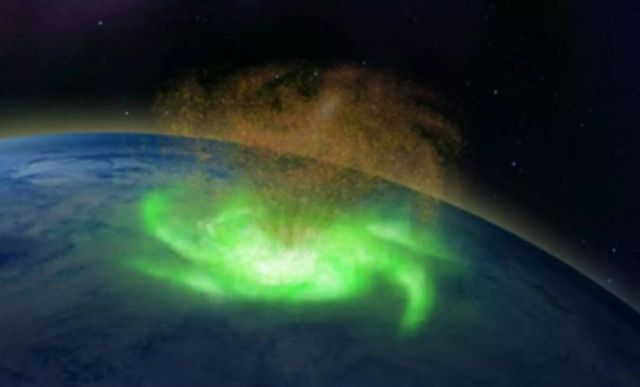 Space hurricane observed over the Earth’s polar ionosphere, for the first time.

Scientists detected a space hurricane in the polar ionosphere and magnetosphere during low solar and otherwise low geomagnetic activity.
The first observations of a space hurricane have been revealed in Earth’s upper atmosphere, confirming their existence and shedding new light on the relationship between planets and space.

The unprecedented observations, made by satellites in August 2014, were only uncovered during retrospective analysis by scientists at the University of Reading, as part of a team led by Shandong University in China, that confirmed the hurricane and offered clues about its formation.

This analysis has now allowed a 3D image to be created of the 1,000km-wide swirling mass of plasma several hundred kilometres above the North Pole, raining electrons instead of water, and in many ways resembling the hurricanes we are familiar with in the Earth’s lower atmosphere. 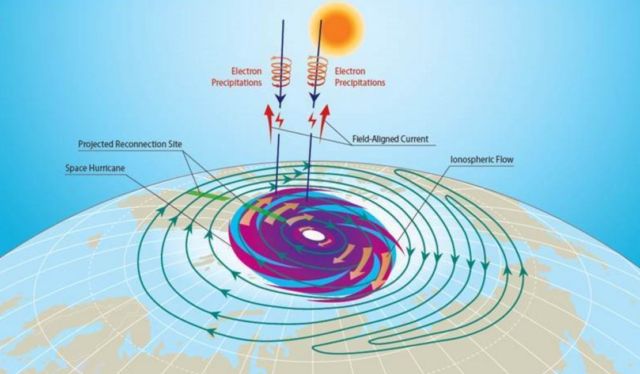 Schematic of the space hurricane and its formation mechanism during an extremely quiet geomagnetic condition with northward IMF and a dominant By component. Credit Shandong University

Professor Mike Lockwood, space scientist at the University of Reading, said: “Until now, it was uncertain that space plasma hurricanes even existed, so to prove this with such a striking observation is incredible”.

“Tropical storms are associated with huge amounts of energy, and these space hurricanes must be created by unusually large and rapid transfer of solar wind energy and charged particles into the Earth’s upper atmosphere.

“Plasma and magnetic fields in the atmosphere of planets exist throughout the universe, so the findings suggest space hurricanes should be a widespread phenomena.”

The findings were published in Nature Communications.