Surprising new Details about our Sun

Surprising new Details about our Sun 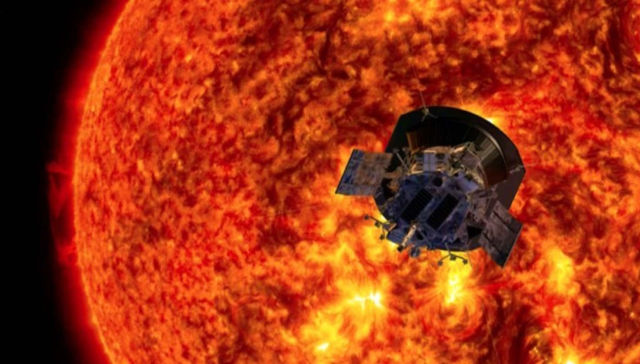 The Sun is revealing itself in dramatic detail and shedding light on how other stars may form and behave throughout the universe – all thanks to NASA’s Parker Solar Probe.

“Getting data at the source is already revolutionizing our understanding of our own star.”

The WISPR image on NASA’s Parker Solar Probe captured imagery of the constant outflow of material from the Sun during its close approach to the Sun in April 2019.

The spacecraft is enduring scorching temperatures to gather data, which are being shared for the first time in four new papers that illuminate previously unknown and only-theorized characteristics of our volatile celestial neighbor.

The information Parker has uncovered about how the Sun constantly ejects material and energy will help scientists rewrite the models they use to understand and predict the space weather around our planet, and understand the process by which stars are created and evolve.

This information will be vital to protecting astronauts and technology in space – an important part of NASA’s Artemis program, which will send the first woman and the next man to the Moon by 2024 and, eventually, on to Mars.

They reveal new insights into the processes that drive the solar wind – the constant outflow of hot, ionized gas that streams outward from the Sun and fills up the solar system – and how the solar wind couples with solar rotation.

Through these flybys, the mission also has examined the dust of the coronal environment, and spotted particle acceleration events so small that they are undetectable from Earth, which is nearly 93 million miles from the Sun.

During its initial flybys, Parker studied the Sun from a distance of about 15 million miles. That is already closer to the Sun than Mercury, but the spacecraft will get even closer in the future, as it travels at more than 213,000 mph, faster than any previous spacecraft.