Team Drills into a Lake in Antarctica

Team Drills into a Lake in Antarctica Scientists drilled thousands of feet of ice into Mercer Subglacial lake, in Antarctica.

The Drill Team began drilling the main borehole on the evening of December 23rd and reached the lake faster than expected at 10:30pm on December 26th with a borehole depth of 1084 meters.

Part of the drilling process involves sampling the drill water to test its cleanliness. The water has been tested twice thus far, and both tests showed the water was “as clean as filtered water can get”, in the words of SALSA PI Brent Christner. The drill water is run through filters that catch 99.9% of bacteria and particles.

When the drill broke through the ice over the lake, only a tiny fraction of drill water mixed into the lake as the pressurized lake water rushed up the borehole and prevented most of the drill water from mixing into the lake. Although very little drill water will mix into the lake, the SALSA team has taken every precaution available to maintain clean access into Mercer Subglacial Lake. 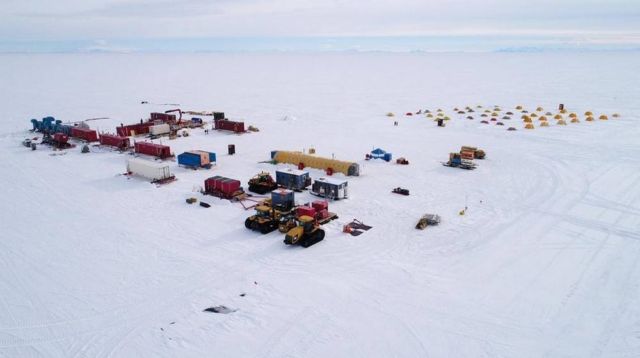 On December 24th, Al Gagnon and two SALSA Marine Techs Michael Tepper-Rasmussen and Jack Greenberg, successfully tested the WHOI (Woods Hole Research Institute) Gravity Corer in a ‘mock’ borehole. The Gravity Corer, also known as a Deep Corer uses its heavy weight to take up to 20-foot core samples. The Gravity Corer will lower down the borehole to a specified height and then make a controlled freefall and use its weight to dive deep into the sediment.