TESS telescope has found a nearby super-Earth

TESS telescope has found a nearby super-Earth 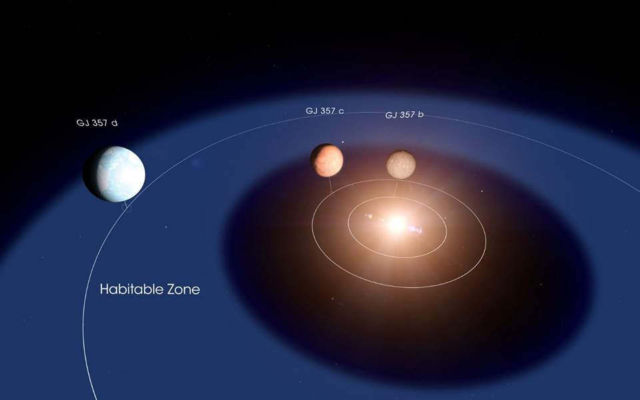 A piping hot planet discovered by NASA’s Transiting Exoplanet Survey Satellite (TESS) has pointed the way to additional worlds orbiting the same star, one of which is located in the star’s habitable zone. If made of rock, this planet may be around twice Earth’s size.

Above, this diagram shows the layout of the GJ 357 system. Planet d orbits within the star’s so-called habitable zone, the orbital region where liquid water can exist on a rocky planet’s surface. If it has a dense atmosphere, which will take future studies to determine, GJ 357 d could be warm enough to permit the presence of liquid water.  Credit: NASA’s Goddard Space Flight Center/ Chris Smith

The new worlds orbit a star named GJ 357, an M-type dwarf about one-third the Sun’s mass and size and about 40% cooler that our star. The system is located 31 light-years away in the constellation Hydra. In February, TESS cameras caught the star dimming slightly every 3.9 days, revealing the presence of a transiting exoplanet — a world beyond our solar system — that passes across the face of its star during every orbit and briefly dims the star’s light.

Tour the GJ 357 system, located 31 light-years away in the constellation Hydra. Astronomers confirming a planet candidate identified by NASA’s Transiting Exoplanet Survey Satellite subsequently found two additional worlds orbiting the star. The outermost planet, GJ 357 d, is especially intriguing to scientists because it receives as much energy from its star as Mars does from the Sun.


.@NASA_TESS observations led to the discovery of three planets around a star known as GJ 357, which is located just 31 light-years away. The outermost planet, GJ 357 d, orbits within the star’s so-called habitable zone. Learn more here: https://t.co/iTxgSASv7l pic.twitter.com/29s3RJTV8h