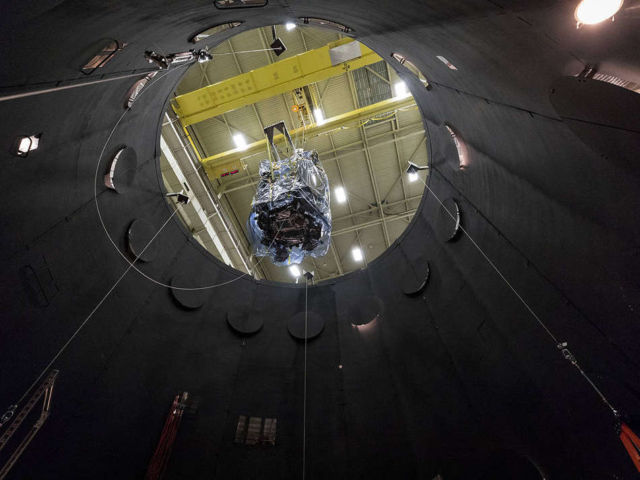 The Parker Solar Probe is lowered into the 40-foot-tall thermal vacuum chamber, at NASA’s Goddard Space Flight Center, to simulate the extreme conditions in space.

The thermal vacuum chamber simulates the harsh conditions that the spacecraft will experience on its journey through space, including near-vacuum conditions and severe hot and cold temperatures. The spacecraft will remain in the chamber for about seven weeks, coming out in mid-March for final tests and packing before heading to Florida, where it’s scheduled to launch in July 2018 aboard a Delta IV Heavy launch vehicle.

NASA’s historic Parker Solar Probe mission will revolutionize our understanding of the Sun, where changing conditions can propagate out into the solar system, affecting Earth and other worlds. Parker Solar Probe will travel through the sun’s atmosphere, closer to the surface than any spacecraft before it, facing brutal heat and radiation conditions — and ultimately providing humanity with the closest-ever observations of a star.