The brightest Object yet discovered in the early Universe

The brightest Object yet discovered in the early Universe 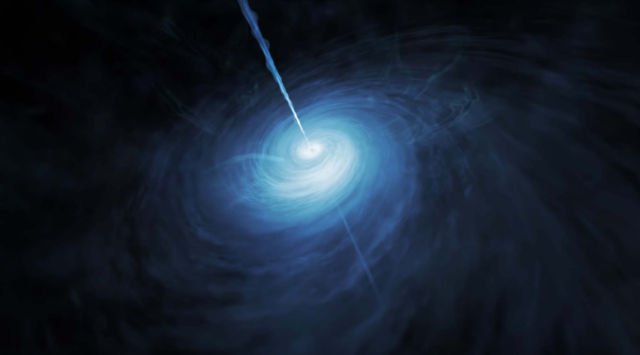 Astronomers have discovered the brightest gravitationally lensed object ever seen at a time when the universe was less than one billion years old.

With the help of multiple, world-class telescopes in Hawaii – Gemini Observatory, James Clerk Maxwell Telescope (JCMT), United Kingdom Infra-Red Telescope  (UKIRT), and W. M. Keck Observatory on Maunakea, Hawaii Island, as well as the Panoramic Survey Telescope and Rapid Response System (Pan-STARRS1) operated by the University of Hawaii Institute for Astronomy on Haleakala, Maui – the researchers discovered that the brilliant beacon is a quasar, the core of a galaxy with a black hole ravenously eating material surrounding it.

This animation shows an artist’s impression of J043947.08+163415.7, a very distant quasar powered by a supermassive black hole. This object is by far the brightest object yet discovered in the early Universe.

Though the quasar is very far away – 12.8 billion light-years – astronomers can detect it because a galaxy closer to Earth acts as a lens and makes the quasar look extra bright. The gravitational field of the closer galaxy warps space itself, bending and amplifying the distant quasar’s light. This effect is called gravitational lensing.

Though researchers have searched for these very remote quasars for over 20 years, a rare and fortuitous celestial alignment made this one visible to them.

The results are published in today’s issue of The Astrophysical Journal Letters and were announced this afternoon during a press conference at the 233rd Meeting of the American Astronomical Society in Seattle.