The Largest Virtual Universe ever created

The Largest Virtual Universe ever created 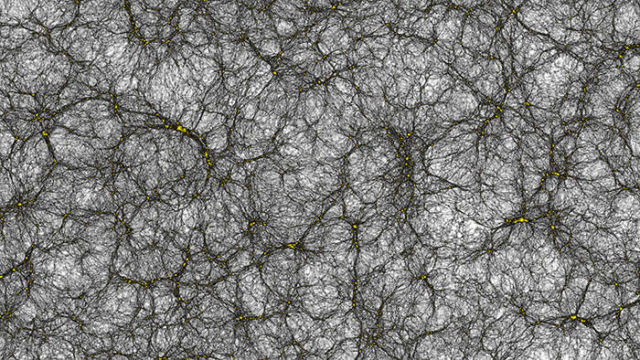 Scientists at the University of Zurich have created the largest virtual Universe with a large supercomputer.

Using “2 trillion digital particles” of information the researchers at the University of Zurich, created the simulated universe, that will help them explore the nature of dark matter and dark energy.

Above, the Cosmic Web: A section of the virtual universe, a billion light years across, showing how dark matter is distributed in space, with dark matter halos the yellow clumps, interconnected by dark filaments. Cosmic void, shown as the white areas, are the lowest density regions in the Universe. (Image: Joachim Stadel, UZH)

The simulation that contains some 25 billion virtual galaxies, is the largest Universal simulation ever.

This catalogue is being used to calibrate the experiments on board the Euclid satellite, that will be launched in 2020 with the objective of investigating the nature of dark matter and dark energy.