The Next Generation of Flight

Home/Posts/TECHNOLOGY/Aviation/The Next Generation of Flight
Previous Next

The Next Generation of Flight 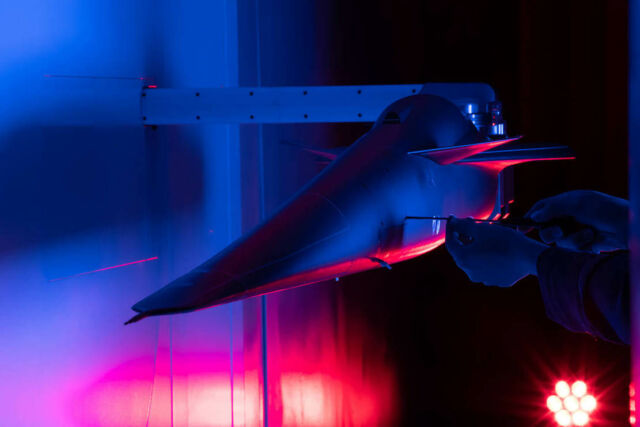 One part of this safety check is to analyze data collected for the X-59’s flight control system through low-speed wind tunnel tests.

The X-59 is central to NASA’s Quesst mission to expand supersonic flight and provide regulators with data to help change existing national and international aviation rules that ban commercial supersonic flight over land. The aircraft is designed to produce a gentle thump instead of a sonic boom.

Recently, Lockheed Martin’s Skunk Works facility in Palmdale, California, completed low-speed wind tunnel tests of a scale model of the X-59’s forebody. The tests provided measurements of how wind flows around the aircraft nose and confirmed computer predictions made using computational fluid dynamics, or CFD, software tools. The data will be fed into the aircraft flight control system and will allow the pilot to know the altitude, speed and angle that the aircraft is flying at in the sky.

In this image, a technician works on the X-59 model during testing in the low-speed wind tunnel, in February 2022.