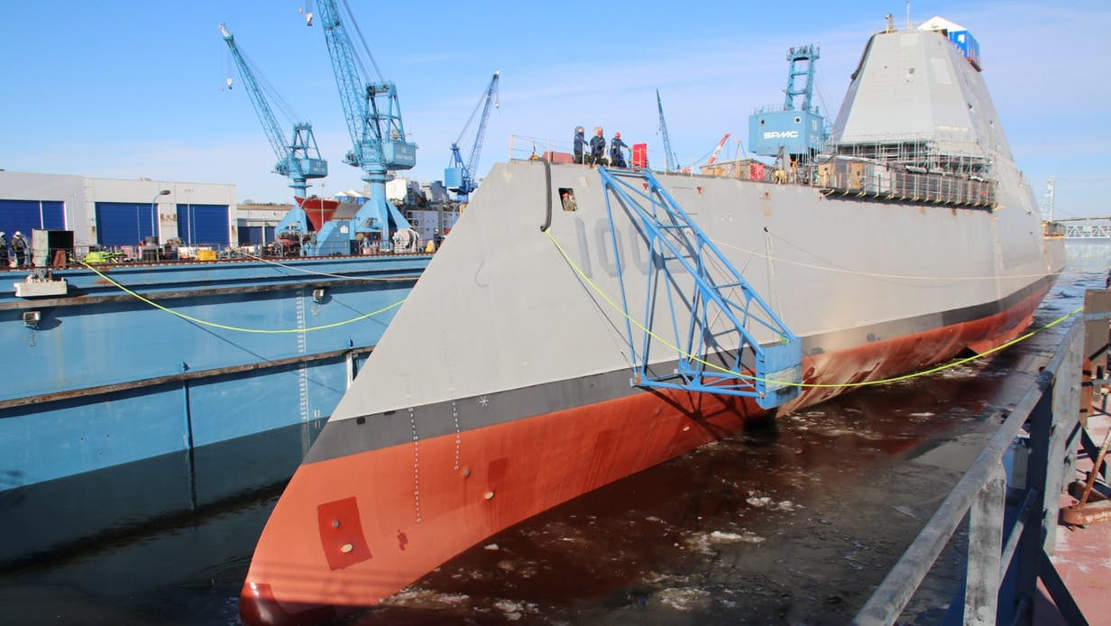 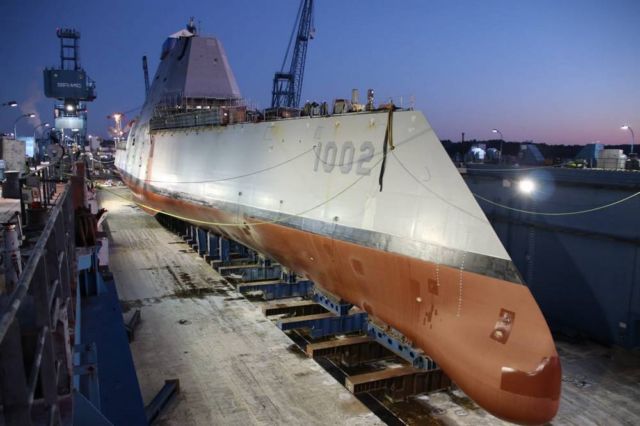 The process of launching a ship is a multi-day process that includes moving the ship from the land level facility to the dry dock which is then slowly flooded until the ship is afloat. With the ship in the water, final outfitting and production can commence.

Above, following a multi-day process that includes moving the ship from the land level facility to the dry dock, the future USS Lyndon B. Johnson (DDG 1002) is made ready before flooding of the dry dock at General Dynamic-Bath Iron Works shipyard, and subsequent launching of the third Zumwalt-class destroyer.  Credit U.S. Navy photo courtesy of General Dynamics-Bath Iron Works/Released

“It’s important for the DDG 1000 program and shipyard to reach this major milestone,” said Capt. Kevin Smith, DDG 1000 program manager, Program Executive Office (PEO) Ships. “With the first two ships of the class underway, we are excited to continue the next phase of construction of the future Lyndon B. Johnson.”

Zumwalt-class destroyers feature a state-of-the-art electric propulsion system, wave-piercing tumblehome hull, stealth design and are equipped with the most advanced warfighting technology and weaponry. These ships will be capable of performing a range of deterrence, power projection, sea control, and command and control missions while allowing the Navy to evolve with new systems and missions.

“The crew of Lyndon B. Johnson looks forward to bringing this great warship honoring our 36th President to life, and we’re proud to have the opportunity to be present for this important step in the ship’s construction,” said Capt. Jeremy Gray, prospective commanding officer, DDG 1002. “It is truly impressive to see the ship afloat in the Kennebec River for the first time and we look forward to taking her to sea.”

The future Lyndon B. Johnson is the third and final DDG 1000 Zumwalt-class ship, and is scheduled to be christened in the spring of 2019.

As one of the Defense Department’s largest acquisition organizations, PEO Ships is responsible for executing the development and procurement of all destroyers, amphibious ships, special mission and support ships, and special warfare craft.