This is our Galaxy’s Magnetic Center

This is our Galaxy’s Magnetic Center 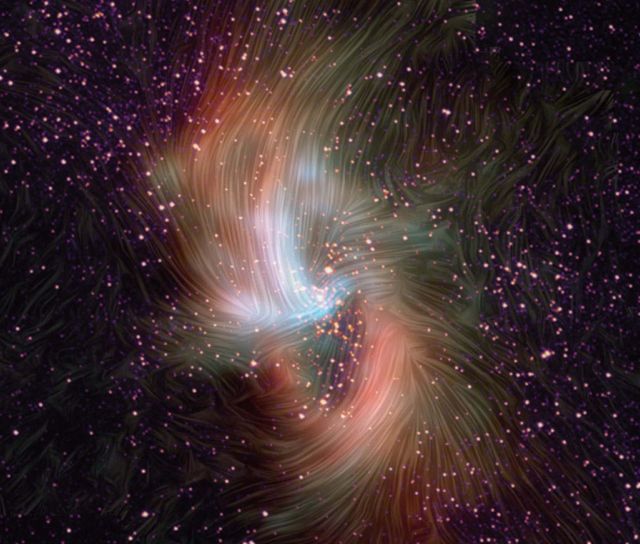 What’s the magnetic field like in the center of our Milky Way Galaxy?

To help find out, NASA’s SOFIA observatory flying in a modified 747, imaged the central region with an instrument known as HAWC+. HAWC+ maps magnetism by observing polarized infrared light emitted by elongated dust grains rotating in alignment with the local magnetic field.

Now at our Milky Way’s center is a supermassive black hole with a hobby of absorbing gas from stars it has recently destroyed. Our galaxy’s black hole, though, is relatively quiet compared to the absorption rate of the central black holes in active galaxies.

The featured image gives a clue as to why — a surrounding magnetic field may either channel gas into the black hole — which lights up its exterior, or forces gas into an accretion-disk holding pattern, causing it to be less active — at least temporarily. Inspection of the featured image — appearing perhaps like a surreal mashup of impasto art and gravitational astrophysics — brings out this telling clue by detailing the magnetic field in and around a dusty ring surrounding Sagittarius A*, the black hole in our Milky Way’s center.