This is the smallest Star ever found

This is the smallest Star ever found 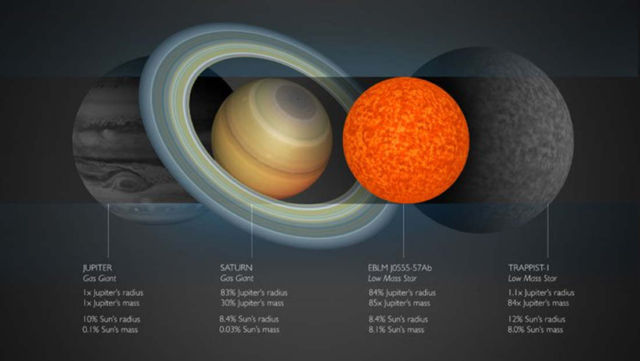 Astronomers discovered the smallest star so far, only slightly larger than Saturn.

With a radius around 85 percent that of Jupiter, but 85 percent heavier, is the smallest star ever recorded.

Above, EBLM J0555-57Ab next to Jupiter, Saturn and TRAPPIST-1.  Credit University of Cambridge

It is part of a binary system, as it orbits another much larger star.

“Our discovery reveals how small stars can be,” said Alexander Boetticher, the lead author of the study, and a Master’s student at Cambridge’s Cavendish Laboratory and Institute of Astronomy. “Had this star formed with only a slightly lower mass, the fusion reaction of hydrogen in its core could not be sustained, and the star would instead have transformed into a brown dwarf.”