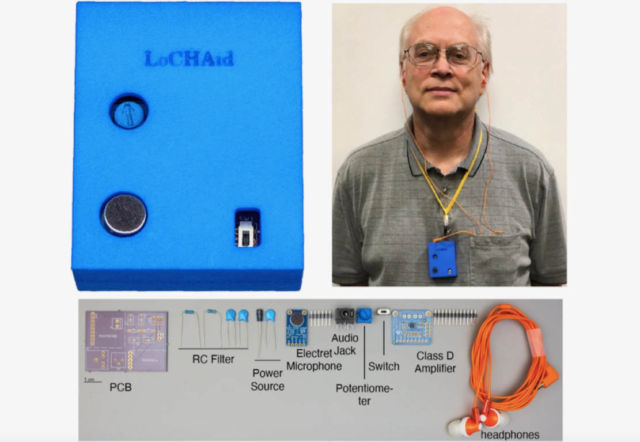 Researchers created ultra-low-cost hearing aid device, with a dollar’s worth of open-source parts and a 3D-printed case

The ultra-low-cost, proof-of-concept device known as LoCHAid is designed to be easily manufactured and repaired in locations where conventional hearing aids are priced beyond the reach of most citizens.

Above: The LoCHAid is built from standard electronic components housed in a 3D-printed shell. The prototype resembles a wearable music player.   Credit Georgia Tech

The minimalist device is expected to meet most of the World Health Organization’s targets for hearing aids aimed at mild to moderate age-related hearing loss. The prototypes built so far look like wearable music players instead of a traditional behind-the-ear hearing aids.

M. Saad Bhamla, an assistant professor in the School of Chemical and Biomolecular Engineering at the Georgia Institute of Technology, explained:

“The challenge we set for ourselves was to build a minimalist hearing aid, determine how good it would be, and ask how useful it would be to the millions of people who could use it. The need is obvious because conventional hearing aids cost a lot and only a fraction of those who need them have access.”

Age-related hearing loss affects more than 200 million adults over the age of 65 worldwide. Hearing aid adoption remains relatively low, particularly in low- and middle-income countries where fewer than 3% of adults use the devices — compared to 20% in wealthier countries. Cost is a significant limitation, with the average hearing aid pair costing $4,700 in the United States and even low-cost personal sound amplification devices — which don’t meet the criteria for sale as hearing aids — priced at hundreds of dollars globally.

Details of the project are described Sept. 23 in the journal PLOS ONE.