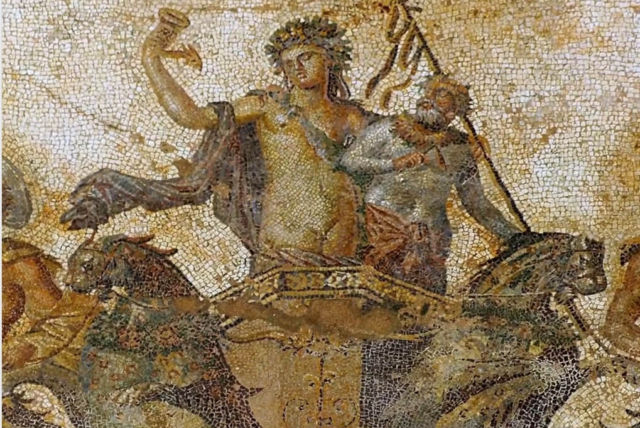 In this video: Uncovering a stunning Ancient Greek mosaic of Dionysus in Dion, Macedonia, Greece.

It’s a lot of work that requires meticulous attention to details but the result is absolutely worth it! Go behind the scenes with the team of conservators at Dion and get a fascinating glimpse of the restoration of one of the most exciting archaeological discoveries in the site, the mosaic of the “Villa of Dionysus.”

Dionysus or Dionysos[a] is the god of the grape-harvest, winemaking and wine, of fertility, orchards and fruit, vegetation, insanity, ritual madness, religious ecstasy, festivity and theatre in ancient Greek religion and myth.

He is also known as Bacchus (/ˈbækəs/ or /ˈbɑːkəs/; Greek: Βάκχος, Bákkhos), the name adopted by the Romans; the frenzy he induces is bakkheia. Another name used by the Romans is Liber meaning “free”, due to his association with wine and the Bacchanalia and other rites, and the freedom associated with it. His thyrsus, sometimes wound with ivy and dripping with honey, is both a beneficent wand and a weapon used to destroy those who oppose his cult and the freedoms he represents. As Eleutherios (“the liberator”), his wine, music and ecstatic dance free his followers from self-conscious fear and care, and subvert the oppressive restraints of the powerful. Those who partake of his mysteries are believed to become possessed and empowered by the god himself.

Video by Konstantinos Arvanitakis and the Onassis Foundation.