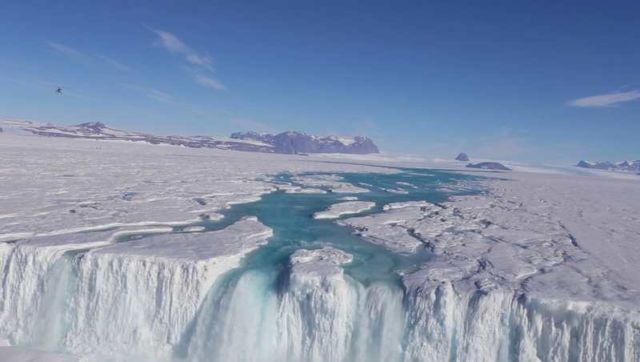 Scientists have discovered that seasonally flowing streams fringe much of Antarctica’s ice.

Above, seen from an aircraft, a 400-foot-wide waterfall drains off the Nansen Ice Shelf into the ocean. Credit Wong Sang Lee/Korea Polar Research Institute

Antarctica is already losing ice, but the direct effects of meltwater, which generally refreezes in winter, are probably negligible for now. The concern among glaciologists is that this could change in the future. Most loss right now is taking place near the edges, where giant, floating shelves of ice attached to the land are being eroded from underneath by warming ocean currents. The shelves, which ring three-quarters of Antarctica, help hold back the land-bound glaciers behind them, and as they lose mass, glaciers appear to be accelerating their march to the sea. 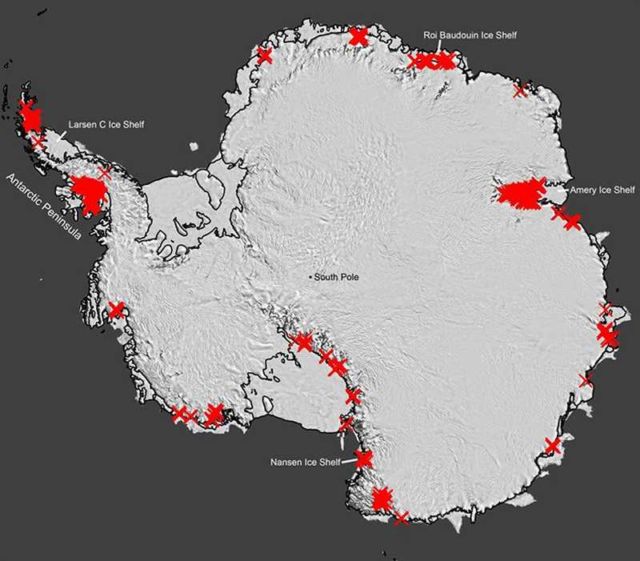 Each red ‘X’ represents a separate drainage. Up to now, such features were thought to exist mainly on the far northerly Antarctic Peninsula (upper left). Their widespread presence signals that the ice may be more vulnerable to melting than previously thought. Adapted from Kingslake et al., Nature 2017

The most dramatic example is the Antarctic Peninsula, which juts far north from the main ice sheet, and where average temperatures have soared 7 degrees Fahrenheit in the last 50 years. In 1995 and 2002, large chunks of the peninsula’s Larsen Ice Shelf suddenly disintegrated into the ocean within days. Scientists now suspect that pooling water was at work; liquid tends to burrow down, fracturing the ice with heat or pressure, or both, until a shattering point is reached. Today, another giant piece of the Larsen is cracking, and could come apart at any time.