We are made of Stardust

We are made of Stardust 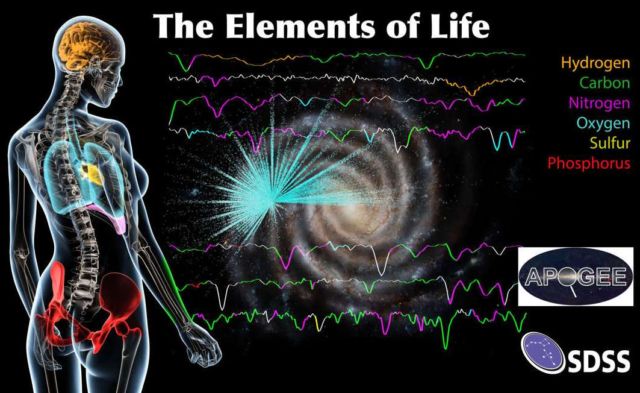 To say “we are stardust” may be a cliche, but it’s an undeniable fact that elements of life mapped across the Milky Way.

The most of the essential elements of life are made in stars.

The six most common elements of life on Earth (including more than 97% of the mass of a human body) are carbon, hydrogen, nitrogen, oxygen, sulphur and phosphorus.

Above, the colors in the spectra show dips, the size of which reveal the amount of these elements in the atmosphere of a star. The human body on the left uses the same color coding to evoke the important role these elements play in different parts of our bodies, from oxygen in our lungs to phosphorous in our bones (although in reality all elements are found all across the body).   Image Credit: Dana Berry/SkyWorks Digital Inc.; SDSS collaboration

In the background is an artist’s impression of the Galaxy, with cyan dots to show the APOGEE measurements of the oxygen abundance in different stars; brighter dots indicate higher oxygen abundance.

“For the first time, we can now study the distribution of elements across our Galaxy,” says Sten Hasselquist of New Mexico State University. “The elements we measure include the atoms that make up 97% of the mass of the human body.”

The new results come from a catalog of more than 150,000 stars; for each star, it includes the amount of each of almost two dozen chemical elements. The new catalog includes all of the so-called “CHNOPS elements” – carbon, hydrogen, nitrogen, oxygen, phosphorous, and sulfur – known to be the building blocks of all life on Earth. This is the first time that measurements of all of the CHNOPS elements have been made for such a large number of stars.

Carl Sagan – Cosmos- Stars – We Are Their Children