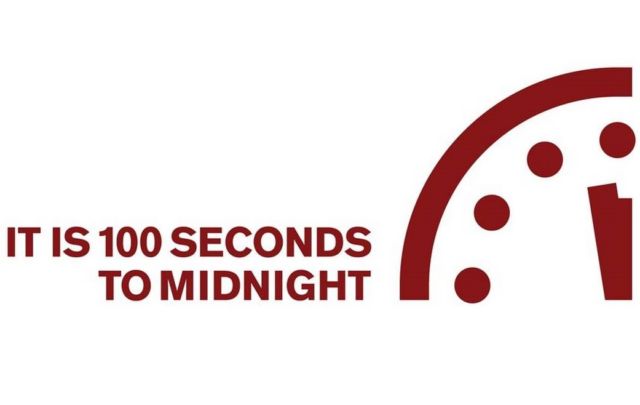 The Bulletin of the Atomic Scientists just moves the hands of the Doomsday Clock. It is now 100 Seconds to Midnight.

“The Doomsday Clock now stands at 100 seconds to midnight, the most dangerous situation that humanity has ever faced. Now is the time to come together—to unite and to act,”  said Mary Robinson, chair of The Elders.


The #DoomsdayClock has been set at 100 seconds to midnight—closer than ever before to apocalypse.

The @BulletinAtomic Scientists, which is housed at #UChicago, announced the change during an event in Washington, D.C. https://t.co/AVfzQtB799 pic.twitter.com/8A8G4aj88U

“It is 100 seconds to midnight. We are now expressing how close the world is to catastrophe in seconds—not hours, or even minutes. It is the closest to Doomsday we have ever been in the history of the Doomsday Clock. We now face a true emergency—an absolutely unacceptable state of world affairs that has eliminated any margin for error or further delay.”