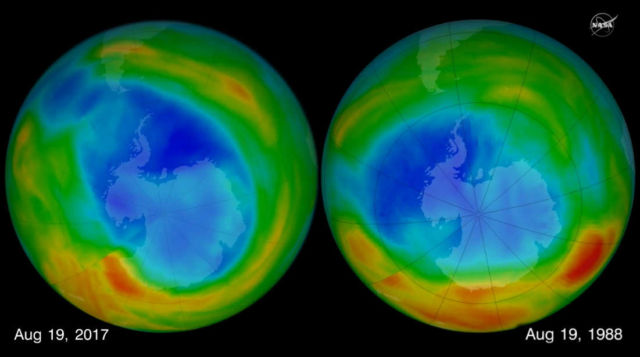 We can now heal the Ozone Hole.  NASA sees definitive evidence of the Montreal Protocol’s success.

NASA and NOAA scientists work together to study the ozone layer, monitoring the hole over Antarctica as it fluctuates with the seasons.

This is the first definitive evidence of the success of the Montreal Protocol on Substances that Deplete the Ozone Layer, which was ratified in 1987. The international treaty banned the use of chlorofluorocarbons and related compounds, which break down in the stratosphere and release chlorine molecules. This chlorine depletes the ozone layer and is responsible for creating the hole in the ozone layer over Antarctica.

The ozone hole fluctuates each year, reaching an annual maximum at the end of southern winter, usually in September. The hole has been trending smaller for the last few years, but as temperature has an effect on ozone-depletion, this was not definitive evidence of the Montreal Protocol’s efficacy.