What does the Milky Way Weigh?

Home/Posts/SCIENCES/Astronomy/What does the Milky Way Weigh?
Previous Next

What does the Milky Way Weigh? 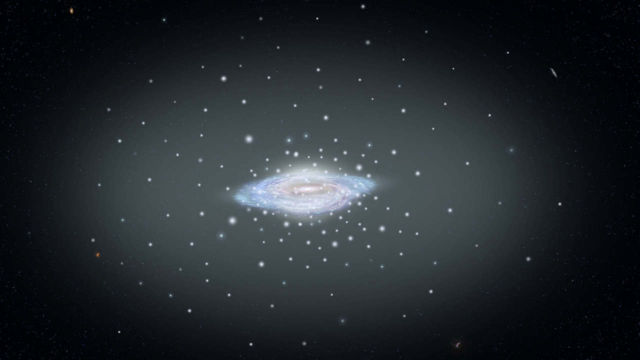 By studying the movements of orbiting clusters of stars, astronomers have measured the mass of the Milky Way.

We live in a gigantic star city. Our Milky Way galaxy contains an estimated 200 billion stars. But that’s just the bare tip of the iceberg. The Milky Way is surrounded by vast amounts of an unknown material called dark matter that is invisible because it doesn’t release any radiation.

Astronomers know it exists because, dynamically, the galaxy would fly apart if dark matter didn’t keep a gravitational lid on things.

Still, astronomers would like to have a precise measure of the galaxy’s mass to better understand how the myriad galaxies throughout the universe form and evolve. Other galaxies can range in mass from around a billion solar masses to 30 trillion solar masses.

How does our Milky Way compare?

Curious astronomers teamed up the Hubble Space Telescope and European Space Agency’s Gaia satellite to precisely study the motions of globular star clusters that orbit our galaxy like bees around a hive. The faster the clusters move under the entire galaxy’s gravitational pull, the more massive it is. The researchers concluded the galaxy weighs 1.5 trillion solar masses, most of it locked up in dark matter. Therefore, the Milky Way is a “Goldilocks” galaxy, not too big and not too small. Just right!