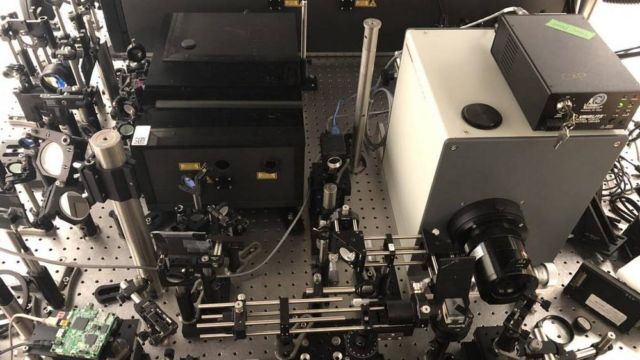 INRS professor and ultrafast imaging specialist Jinyang Liang. He and his colleagues, led by Caltech’s Lihong Wang, have developed what they call T-CUP: the world’s fastest camera, capable of capturing ten trillion (1013) frames per second.

Using current imaging techniques, measurements taken with ultrashort laser pulses must be repeated many times, which is appropriate for some types of inert samples, but impossible for other more fragile ones. For example, laser-engraved glass can tolerate only a single laser pulse, leaving less than a picosecond to capture the results. In such a case, the imaging technique must be able to capture the entire process in real time.

Compressed ultrafast photography (CUP) was a good starting point them. At 100 billion frames per second, this method approached, but did not meet, the specifications required to integrate femtosecond lasers. To improve on the concept, the new T-CUP system was developed based on a femtosecond streak camera that also incorporates a data acquisition type used in applications such as tomography.

Real-time imaging of temporal focusing of a femtosecond laser pulse at 2.5 Tfps.