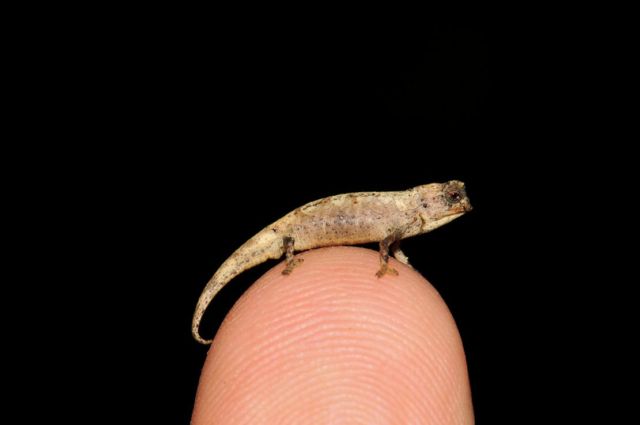 Nano-Chameleon, a new contender for the title of ‘World’s Smallest Reptile’ has a body size of just 13.5 mm.

An international team, led by the Bavarian State Collection of Zoology (ZSM-SNSB), has discovered a minuscule new species of chameleon. The sole known, apparently adult male of the new species has a body size of just 13.5 mm, making it the smallest known male of the roughly 11,500 known non-avian reptiles. A comparison with 51 other chameleon species showed that the new species has exceptionally large genitals.

On an expedition in the North of Madagascar, a joint team of German and Malagasy scientists came across a new contender for the title of ‘world’s smallest reptile’. They have named the new species Brookesia nana. ‘At a body length of just 13.5 mm and a total length of just 22 mm including the tail, the male Nano-Chameleon is the smallest known male of all “higher vertebrates”’ says Frank Glaw, Curator of Herpetology at the Bavarian State Collection of Zoology (ZSM-SNSB) and first author on the study. The female is larger at 19 mm body length and 29 mm total length. In spite of intensive efforts, the authors were only able to find two individuals. 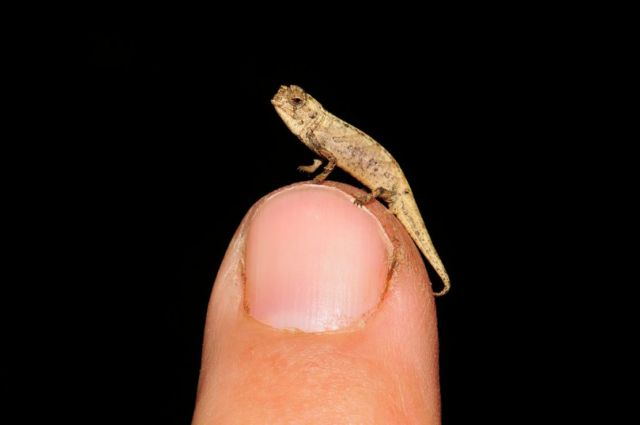 ‘With the aid of micro-CT scans – essentially three-dimensional x-rays – we were able to identify two eggs in the female specimen, and so demonstrate that it is an adult,’ says Mark D. Scherz of the University of Potsdam. To determine the sexual maturity of the male, the team looked at its genitals, which were well-developed. These structures are called ‘hemipenes’, and, like all other reptiles and snakes, are paired, and often have features that can be used to identify species.