Pollution could be the solution to find an Extraterrestrial Civilization

Pollution could be the solution to find an Extraterrestrial Civilization 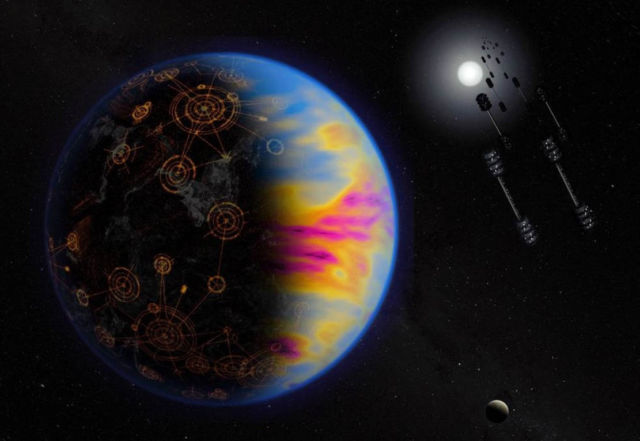 We might be able to detect an advanced extraterrestrial civilization, using its own atmospheric pollution, according to new NASA research.

The study looked at the presence of nitrogen dioxide gas (NO2), which on Earth is produced by burning fossil fuels but can also come from non-industrial sources such as biology, lightning, and volcanoes.

“On Earth, most of the nitrogen dioxide is emitted from human activity — combustion processes such as vehicle emissions and fossil-fueled power plants,” said Ravi Kopparapu of NASA’s Goddard Space Flight Center in Greenbelt, Maryland. “In the lower atmosphere (about 10 to 15 kilometers or around 6.2 to 9.3 miles), NO2 from human activities dominate compared to non-human sources. Therefore, observing NO2 on a habitable planet could potentially indicate the presence of an industrialized civilization.” Kopparapu is lead author of a paper on this research accepted by the Astrophysical Journal and published online Tuesday, February 9 in arXiv.

Astronomers have found over 4,000 planets orbiting other stars to date. Some might have conditions suitable for life as we know it, and on some of these habitable worlds, life may have evolved to the point where it produces a technological civilization. Since planets around other stars (exoplanets) are so far away, scientists cannot look for signs of life or civilization by sending spacecraft to these distant worlds. Instead, they must use powerful telescopes to see what’s inside the atmospheres of exoplanets.

A possible indication of life, or biosignature, could be a combination of gases like oxygen and methane in the atmosphere. Similarly, a sign of technology on an exoplanet, called a technosignature, could be what’s considered pollution here on Earth — the presence of a gas that’s released as a byproduct of a widespread industrial process, such as NO2.

This study is the first time NO2 has been examined as a possible technosignature.

“Other studies have examined chlorofluorocarbons (CFCs) as possible technosignatures, which are industrial products that were widely used as refrigerants until they were phased out because of their role in ozone depletion,” said Jacob Haqq-Misra, a co-author of the paper at the Blue Marble Institute of Science, Seattle, Washington. “CFCs are also a powerful greenhouse gas that could be used to terraform a planet like Mars by providing additional warming from the atmosphere. As far as we know, CFCs are not produced by biology at all, so they are a more obvious technosignature than NO2. However, CFCs are very specific manufactured chemicals that might not be prevalent elsewhere; NO2, by comparison, is a general byproduct of any combustion process.”

Artist’s illustration of a technologically advanced exoplanet. The colors are exaggerated to show the industrial pollution, which otherwise is not visible.  Credits: NASA/Jay Freidlander