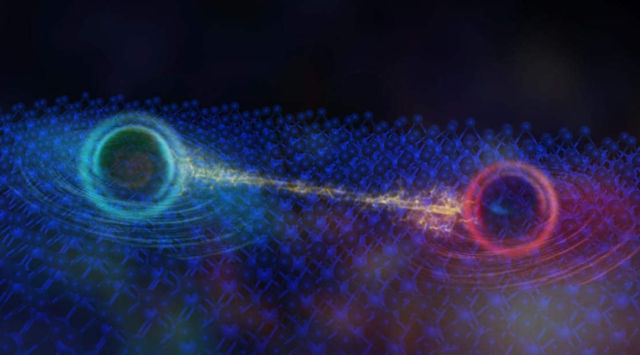 This phenomenon, known as quantum oscillation, discovered by a team led by Princeton physicists, is typically observed in metals rather than insulators, and its discovery offers new insights into our understanding of the quantum world.

The findings also hint at the existence of an entirely new type of quantum particle.

The discovery challenges a long-held distinction between metals and insulators, because in the established quantum theory of materials, insulators were not thought to be able to experience quantum oscillations.

Sanfeng Wu, assistant professor of physics at Princeton University and the senior author of a recent paper in Nature detailing this new discovery, said:

“If our interpretations are correct, we are seeing a fundamentally new form of quantum matter. We are now imagining a wholly new quantum world hidden in insulators. It’s possible that we simply missed identifying them over the last several decades.”

The observation of quantum oscillations has long been considered a hallmark of the difference between metals and insulators. In metals, electrons are highly mobile, and resistivity — the resistance to electrical conduction — is weak. Nearly a century ago, researchers observed that a magnetic field, coupled with very low temperatures, can cause electrons to shift from a “classical” state to a quantum state, causing oscillations in the metal’s resistivity. In insulators, by contrast, electrons cannot move and the materials have very high resistivity, so quantum oscillations of this sort are not expected to occur, no matter the strength of magnetic field applied.