A Huge Telescope on the Moon to study the Big Bang

A Huge Telescope on the Moon to study the Big Bang 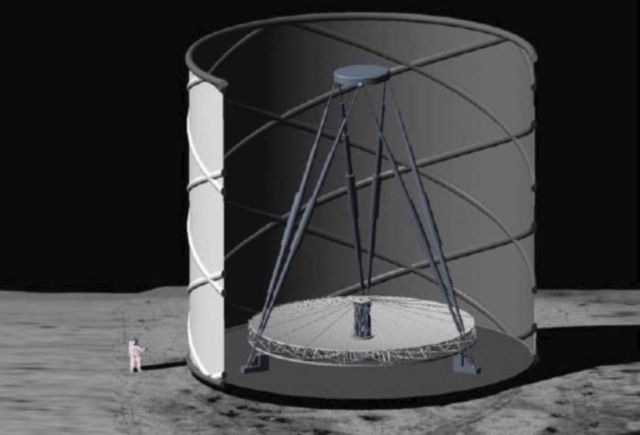 Astronomers revive the idea for a huge telescope on the Moon, to study the moments following the Big Bang.

A group of astronomers from The University of Texas at Austin has found that a telescope idea shelved by NASA a decade ago can solve a problem that no other telescope can: It would be able to study the first stars in the universe. The team, led by NASA Hubble Fellow Anna Schauer, will publish their results in an upcoming issue of The Astrophysical Journal.

NASA Liquid-Mirror Telescope on Moon might see deeper back in time:
Someday, astronauts on the moon may pour liquid onto a disc-shaped mesh to make a huge mirror for a powerful telescope, according to a technical article just made public.

“Throughout the history of astronomy, telescopes have become more powerful, allowing us to probe sources from successively earlier cosmic times — ever closer to the Big Bang,” said professor and team member Volker Bromm, a theorist who has studied the first stars for decades. “The upcoming James Webb Space Telescope [JWST] will reach the time when galaxies first formed.

“But theory predicts that there was an even earlier time, when galaxies did not yet exist, but where individual stars first formed — the elusive Population III stars. This moment of ‘very first light’ is beyond the capabilities even of the powerful JWST, and instead needs an ‘ultimate’ telescope.”

These first stars formed about 13 billion years ago. They are unique, born out of a mix of hydrogen and helium gasses, and likely tens or 100 times larger than the Sun. New calculations by Schauer show that a previously proposed facility, a liquid mirror telescope that would operate from the surface of the Moon, could study these stars. Proposed in 2008 by a team led by Roger Angel of The University of Arizona, this facility was called the Lunar Liquid-Mirror Telescope (LLMT).